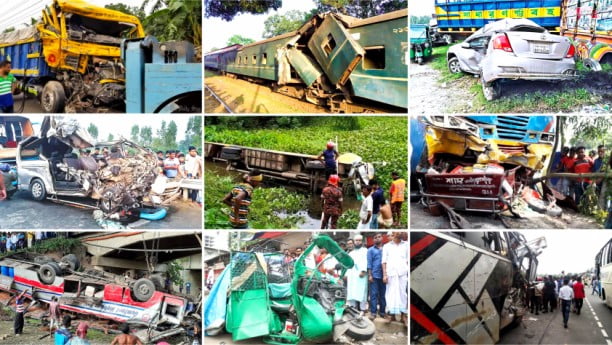 World Bank has joined hands with BRAC to implement a programme to halve road fatalities by 2030. They made the announcement at a virtual meeting Saturday morning, while signing a memorandum of understanding at an event titled “Road Safety Collaboration: Reducing Road Fatalities 50 percent by 2030.”

The project will carry out campaigns on road safety, implement programmes to improve safety of women and children in public transport, and develop skills of drivers, said acting Country Director of the World Bank in Bangladesh, Dandan Chen.

“The losses due to road accidents are comparable to that of life threatening diseases. While the high casualty numbers are unacceptable, they are preventable,” said Chen.

Minister of Road Transport and Bridges Obaidul Quader, who attended the event, reflected on the challenges faced by the government in improving road safety.

“No matter how many roads we build, how much infrastructure we construct, we don’t feel satisfaction if there is no discipline on the roads, if people are not safe on the streets. All our achievements will go in vain,” said Quader.

“We are losing lives on the roads every day. I start every morning with news of road accidents, and when I see them, I feel guilty, and I burn in an invisible fire,” added the minister.

He said that the government is yet to fully implement the Road Safety Act because of certain realities.

Giving a nod to BRAC’s initiative to introduce more female drivers in the transport sector, the minister said, “We want more female drivers, because they are more inclined to follow rules and be more disciplined on the streets.” He added that female drivers graduating from BRAC would be incorporated into the government vehicle pool.

“The road safety situation is not caused by one problem: it is not about the wage system, not just about lack of awareness or lack of drivers’ capacity — all of them combined is causing the road safety epidemic,” said Asif Saleh, executive director of BRAC Bangladesh.

In Bangladesh, road accidents are the fourth leading cause of death of children aged between 5 and 14, and 67 percent of the victims are within the age group of 15-49 years, informed speakers.

Ahmed Najmul Hussain, director of the administration and road safety programme at BRAC, said that their work will include a focus on rural road safety committees.

The event also launched a road safety campaign along the 48km Jashore-Jhenaidah corridor where WB is currently implementing an infrastructure upgrade from two lanes to a safer four-lane highway.

“I believe that undertaking more such community-driven awareness initiatives for the other highways of the country will substantially help reduce the number of road crashes,” said Hussain.