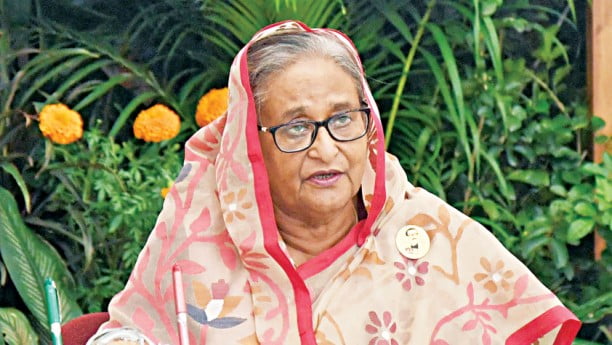 Prime Minister Sheikh Hasina yesterday urged the public representatives of local government bodies to stand beside people and work for their welfare with a service mentality.

“The chairmen and councillors of district councils and other public representatives of local bodies have the responsibilities towards people in their localities,” she said.

The prime minister made the call while addressing an oath-taking ceremony of the chairmen of Madaripur, Faridpur and Moulvibazar district councils as they were elected in the recently-held by-elections.

Sheikh Hasina urged them to give special focus on the overall development of their areas with the service mentality.

Recalling the steps of Father of the Nation Bangabandhu for decentralisation of state power, the prime minister said the great leader had upgraded all the subdivisions to district ones.

“Bangabandhu had also undertaken various programmes and begun working with farsighted plans to develop the new districts by appointing district governors,” she said.

In light of the initiatives of Bangabandhu, Hasina said, the government has been working to fulfill all the basic needs of the people, including healthcare, education, housing, food and clothes.

Besides, the prime minister said, the government has also been working to take power to every house of the country in this Mujib Borsho. “Each house will be illuminated with electricity.”

She mentioned that steps have been taken to ensure food security for all and the government is working to provide housing for every single homeless person.

Hasina directed the chairmen, councillors and representatives of other local government bodies to find out whether anyone left homeless in their localities and come forward to help them get houses.

Talking about coronavirus pandemic, she said the entire world has got stagnant when it comes to social and economic development due to the deadly virus.

Hasina mentioned with satisfaction that leaders and workers of Awami League and its associate bodies stood beside the affected common people alongside the government to face the adverse impacts of the coronavirus.

“They worked hard to provide necessary assistance towards the corona-affected people as well as the farmers to have their crops cut and reached homes safely before floods,” she added.

Prime Minister Sheikh Hasina virtually administered the oath to the newly-elected chairmen of the three district councils from the Gono Bhaban.