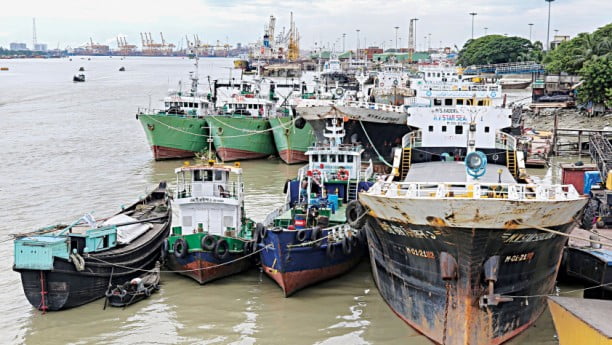 The indefinite work abstention announced by water transport workers was withdrawn yesterday evening after a meeting at the labour ministry in Dhaka.

However, a majority of water transport workers in Chattogram did not resume work initially as the announcement of withdrawal of the work abstention from the president and secretary of Bangladesh Noujan Sramik Federation did not reach them till around 8:30pm last night, the federation’s Joint Secretary Nabi Alam, who resides in Chattogram, told The Daily Star.

“We saw on television only the labour minister saying that the workers agreed to withdraw the work abstention,” he said.

“Later, we got confirmation from the two top leaders, which we got around 8:30pm,” he added.

Bangladesh Noujan Sramik Federation enforced the work abstention since the early hours of October 20, which would continue until their 11-point demand — including food allowances, sea allowances, appointment letters, identity cards and other benefits — were met.

Formally, only the food allowance demand was met and negotiated yesterday and the rest will be negotiated, federation President Shah Alam said.

Businesses were apprehensive of serious disruption in the supply chain of commodities and industrial products and further price hike of essentials as daylong meetings with workers and owners’ associations, initiated by the government, could not ease the stalemate.

Unloading of import cargo from cargo vessels at the outer anchorage of Chattogram Port and transport of these goods with the help of lighter vessels through inland water routes had been suspended for the last three days.

As of yesterday, 42 bigger-sized cargo vessels with 10 lakh tonnes of import cargo were stranded at the outer anchorage. 40 of those had been anchoring idle for the last three days, while the other two arrived on Wednesday afternoon.

Importers incurred huge amounts of financial losses for the three-day standstill as the demurrage charge for these vessels’ idle stay at sea over the last three days stood at around $1.55 million.

Besides, over 900 lighter vessels loaded with 12 lakh tonnes of such goods were idle at 38 different private docks across the country.

Industry owners said apart from the demurrage charges, there was disruption in transport of imported commodities and raw materials to factories.

Seacom Group Managing Director Mohammed Amirul Haque said such a strike in the midst of a pandemic will seriously hamper the country’s economy which is trying hard to recover from the economic fallout of the pandemic.

Two cargo vessels carrying around 75,000 tonnes of cement clinker imported for the group’s Premier Cement factories in Dhaka and Chattogram were stuck at the outer anchorage.

Haque said they would have to bear $12,500 in demurrage charges for the daily overstay of each of these two vessels. He also informed that 50 lighter vessels and oil tankers carrying cement clinkers, edible oil and petroleum for the group also remained idle.

Earlier in the afternoon, State Minister for Shipping Khaled Mahmud Chowdhury was hopeful of solving the issue by yesterday as the officials of BIWTA and Shipping Department sat in meetings with water transport owners and workers.

The state minister told this to journalists after the newly appointed Indian High Commissioner to Bangladesh Vikram Doraiswami made a courtesy call on the state minister at his ministry office.