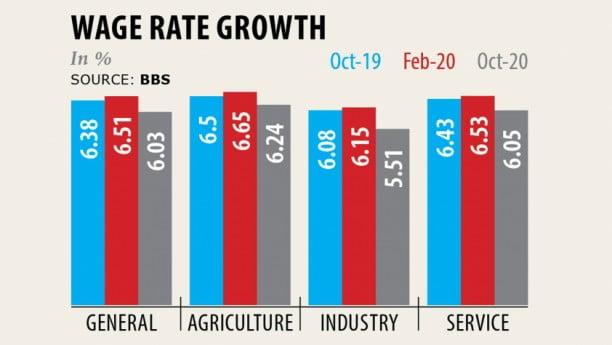 Workers in Bangladesh are still making do with lower wages compared to the pre-pandemic level as the ongoing economic growth has not translated into higher incomes for them in a major way.

Wages grew 6.03 per cent year-on-year in October this year, according to the Wage Rate Index of the Bangladesh Bureau of Statistics (BBS). This is up from September’s 5.95 per cent and August’s 5.91 per cent.

However, October’s rate was lower than the pre-pandemic level of 6.51 per cent in February and 35 basis points below than in the same month a year ago.

Industrial sector workers saw the slowest increase among the three broad sectors: it was up 5.51 per cent, down from 6.51 per cent in February and 6.08 per cent in October in 2019.

This reflects that the country’s industrial sector is still struggling to overcome the impacts of the crisis in terms of sales drop.

Despite the reopening of the economy since June, the services sector, which accounts for more than 50 per cent of the gross domestic product, has not received the momentum as the deadly flu is still causing significant infections and killing people albeit at a lower rate.

“People’s real income has gone down because of higher inflation,” said Zaid Bakht, a former research director of the Bangladesh Institute of Development Studies.

Inflation rose to 6.44 per cent in October, the highest in at least five years, driven by a sharp increase in the price of food items, data from the state-run BBS showed on Wednesday. Within the industrial sector, the wage growth in the construction sub-sector slowed to 4.53 per cent from 4.80 per cent in February.

Similarly, it was 7.25 per cent in the manufacturing sector, down from 8.46 per cent in February this year and 8.32 per cent in October last year.

“There has been no demand for workers in the informal sector as well,” said Bakht, currently the chairman of Agrani Bank. Of the total workforce in Bangladesh, 85 per cent operate in the informal economy.

Many families in Dhaka city have stopped employing housemaids since the pandemic hit the country in March to avoid catching the virus.

One of them is Manjurul Karim, who lives in the city’s Azimpur area. “I can’t take the risk as both my wife and I am diabetic,” said the 55-year-old private sector employee.

Selim Raihan, a professor of economics at the Dhaka University, said the wage rate growth has declined from the pre-Covid period. On the other hand, there is inflationary pressure.

“As a result, the nominal wages are failing to catch up and our real wage is falling. This means, the real purchasing power of the people is falling.”

Citing a survey of the South Asian Network on Economic Modeling (Sanem), where he is the executive director, Prof Raihan said the study of 502 manufacturing and service sector firms showed that there has not been much improvement in the wage.

The wage growth slowed to a five-year low in the just-concluded fiscal year driven by the income loss in the manufacturing and services sectors in the fourth quarter of FY2019-20.