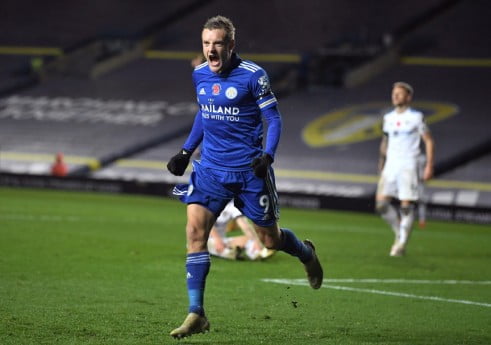 Jamie Vardy inspired and Youri Tielemans scored twice as Leicester City enjoyed an impressive 4-1 win at Leeds United on Monday which moves them up to second in the Premier League.

The Foxes, who have now won all four away games this season, grabbed the lead in the second minute when Vardy intercepted a poor back-pass from Leeds defender Robin Koch and set-up Harvey Barnes to slot home.

Brendan Rodgers’ side doubled their lead in the 21st minute when Marc Albrighton whipped in a cross and Vardy’s low header struck Leeds keeper Illan Meslier in the face and fell to Tielemans to fire home.

Leeds came out strongly after the break and pulled a goal back three minutes after the restart when a deep cross from Stuart Dallas went through a crowded box and into the far corner of the net.

Pablo Hernandez then hit the bar for Leeds with a fine effort from the edge of the box but Leicester restored their two goal advantage with a beautifully worked third goal.

Maddison was involved with the fourth goal, in stoppage time, when Mateusz Klich challenged him from behind and after a VAR review, referee Andre Marriner awarded a penalty which Tielemans confidently converted.