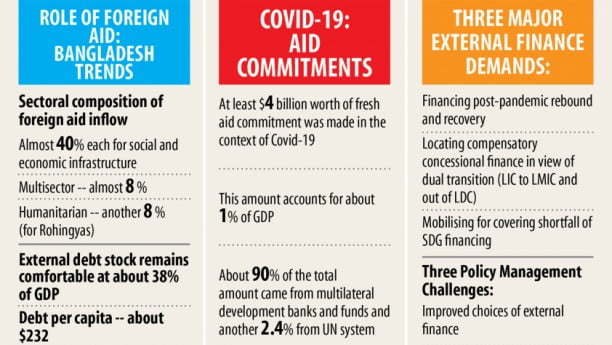 Bangladesh must set development priorities, identify the types of external funds it needs and use them effectively amid growing per capita debt in order to take the economy on the path to recovery in the post-pandemic period, economists said yesterday.

At the same time, policymakers should be vigilant about debt sustainability and pay higher thrust on using foreign aid already committed by multilateral lenders and donors, they said.

The view came at a virtual discussion on “The Multilateral Response to Covid-19 – Perspectives from South Asia,” organised jointly by the Centre for Policy Dialogue (CPD) and the Organisation for Economic Co-operation and Development (OECD).

Currently, $50.39 billion in foreign aid is available for the government, the highest on record.

Bangladesh and other South Asian countries should fix their development priorities and identify the types of finance they needed from donors, CPD Chairman Prof Rehman Sobhan said.

“You must get your policy-making agenda in shape. You must be more serious about implementing policies, and you must be in a better position to dictate the external lenders what you want,” he said.

“You must make better use of your major sources of external finances, including remittance.”

Sobhan said the global development finance architecture is increasingly coming under the control of bilateral donors who use it at the bilateral level and also pledge funds to multilateral institutions to exercise their preferences.

In the case of Bangladesh, the main problem is not debt overhang. But there is a lack of utilisation of foreign finance, prioritising them and using them effectively.

He said Bangladesh’s external debt stock remains comfortable at about 38 per cent of the gross domestic product (GDP) and debt per capita is about $232.

“It has been creeping up since 2015,” said Bhattacharya, suggesting policymakers make improved choices of external finance.

Bangladesh received at least $4 billion in fresh aid commitment since March following the outbreak of the coronavirus. Of the sum, about 46 per cent came as budgetary support and 39.5 per cent as sectoral support with Covid-19 alignment, according to Bhattacharya.

“From the perspective of government, this is fantastic. The significant presence of budget support has given the necessary flexibility in implementing the country’s fiscal space. However, effective utilisation is vital.”

He said the Covid-19 pandemic has created demands for inclusive and integrated multilateralism.

Bhattacharya called for refashioning development cooperation architecture with adequate space for new providers such as private philanthropy and impact investors and new instruments of finance.

Olivier Cattaneo, head of unit of the Policy Analysis and Strategy Development Co-operation Directorate at the OECD, said multilateral stakeholders can use the current crisis as an opportunity to build a system that is better equipped to address new global development challenges.

“The crisis has also exposed some limitations of the multilateral development system, with many countries reacting to the crisis in an uncoordinated way and putting in doubt the competency and impartiality of multilateral organisations.”

CPD Distinguished Fellow Prof Mustafizur Rahman said it is important to know the interest rates at which the finances are coming to countries, including Bangladesh.