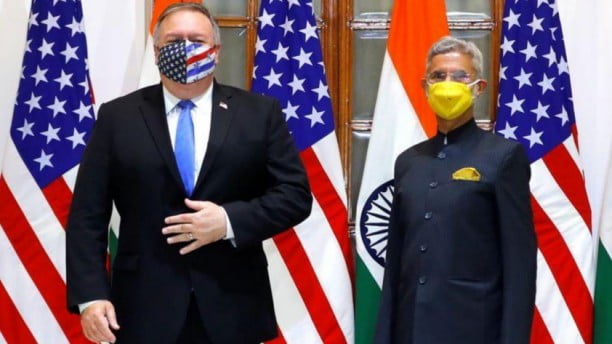 Amid Indo-China border tensions, US Secretary of State Mike Pompeo yesterday declared that Washington stands with New Delhi to deal with any threat as the two countries tightened their mutual strategic embrace by signing a pact to share sensitive satellite and map data.

Pompeo, who arrived in New Delhi on Monday along with Defense Secretary Mark Esper, said after talks with their Indian counterparts that the two countries had to work together to confront the threat China posed to security and freedom.

The annual US-India strategic dialogue comes at a time of heightened tension in the region, with Indian troops confronting Chinese forces on their disputed Himalayan border.

The Basic Exchange and Cooperation Agreement (BECA), which gives India access to classified geo-spatial data as well as critical information having significant military applications from the US, was signed as Pompeo and Esper held hourlong in-person talks with Indian External Affairs Minister S Jaishankar and Defence Minister Rajnath Singh for the third edition of the 2+2 talks in New Delhi, reports our correspondent in New Delhi.

Emerging from the talks and BECA signing, which came a week before US presidential elections, Pompeo, in a joint media appearance with Jaishankar and Rajnath, mentioned the killing of 20 Indian army personnel in Galwan Valley in a clash with Chinese troops in Ladakh on June 14 and said “the US stands with India to deal with any threat”.

“Big things are happening as our democracies align to better protect the citizens of our two countries and indeed, of the free world,” Pompeo told reporters.

“Our leaders, and our citizens, see with increasing clarity that the Chinese Communist Party is no friend to democracy, the rule of law, transparency, nor to freedom of navigation, the foundation of a free and open, prosperous Indo-Pacific,” Pompeo said.

The new defence pact was a “significant milestone” that would foster cooperation between the militaries of both countries, Esper told the news conference.

The United States planned to sell more fighter planes and drones to India, Esper added. The pact will give India access to a range of topographical, nautical and aeronautical data that is considered vital for targeting missiles and armed drones.

It would also allow the United States to provide advanced navigational aids and avionics on US-supplied aircraft to India, an Indian defence source said.

Rajnath said the talks “reaffirmed our commitment to peace and security in Indo-Pacific region where China has been increasingly assertive economically and militarily, sparking concerns in New Delhi and Washington.”

US President Donald Trump has made being tough on China a key part of his campaign to secure a second term in next week’s presidential election and Pompeo has been trying to bolster allies to counter China’s growing influence in the region, reports Reuters.

Jaishankar did not refer directly to China in his comments at the news conference but hailed “national security convergences” with the United States, their determination to tackle security and counter-terrorism issues and ensure peace and stability in the Indo-Pacific region.

This month, India invited Australia to join naval drills it holds each year with the United States and Japan, brushing off Chinese concerns that the exercises destabilise the region.

Following talks in India, Pompeo will go on to Sri Lanka, the Maldives and Indonesia. China’s growing investment and influence in Sri Lanka and the Maldives have sparked concern in both the US and India.

The inking of the BECA completes finalisation of four key foundational pacts underpinning the strategic military ties between the two countries, reports our New Delhi correspondent.

Ever since India and the US signed the General Security of Military Information Agreement (GSOMIA) in 2002, the strategic ties between them have grown. The GSOMIA provides for specific measures to ensure security standards for safeguarding critical information shared by the US with India.

In 2016, the US had designated India as a “major defence partner” seeking to elevate defence trade and technology-sharing to the level of its closest partners, and in the same year the two countries inked the Logistics Exchange Memorandum of Agreement (LEMOA) that allows their militaries to use each other’s bases for repair and replenishment of supplies as well as provide for deeper cooperation.

In 2018, India and the US signed another pact, the Communications Compatibility and Security Agreement (COMCASA), which provides for interoperability between the two militaries and provides for sale of high-end technology from the US to India.