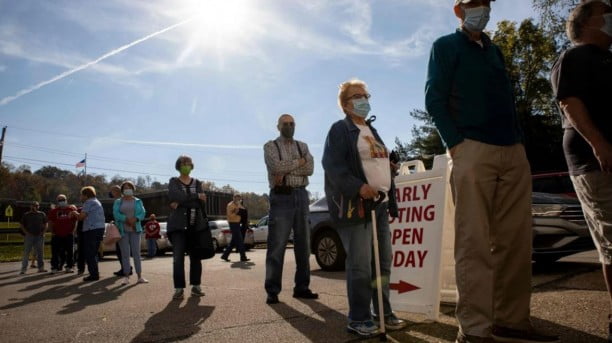 The US Presidential elections scheduled for Tuesday is expected to see a record high turnout of voters, with polls analysts attributing this to Americans’ attempt for a change.

More than 91.6 million Americans have already voted, mostly through mail-in ballots, which faced unproved accusations of fraud by President Donald Trump but got strong support from the Democratic Party candidate Joe Biden.

These votes represent about 43 percent of registered voters nationwide, according to a survey of election officials in all 50 states and Washington, DC, by CNN, Edison Research, and Catalist.

David J Becker, executive director and founder of the Center for Election Innovation & Research, Washington DC, say they estimate voter turnout of 150 million in total out of about 240 million eligible American voters.

“This means 20 million more Americans will be voting this election than that of 2016,” he said during an interaction with a group of journalists virtually participating at the 2020 US Presidential Election Reporting Seminar (Oct 25-Nov 7) organised by the Hawaii-based East-West Centre.

“We don’t see the high voter turnout to keep the thing same. That’s not a thing in American society. This means they want a change,” said David Becker.

In some of the elections with lowest turnout, the presidents were re-elected. One of the examples could be re-election of Bill Clinton in 1996 with low voter turnout of 49.2 percent. Voter turnout in the last few US presidential elections ranged between 55-60 percent, but analysts say it is likely to be beyond 70 percent.

Analysts say mail-in voting, which is around 90 million this presidential election, saw a significant surge this year. Such voting in 2016 was only 25 percent or roughly 32 million which makes this the highest turnout in US history though the nation has had mail-in voting system for 200 years.

They say Covid-19 pandemic, enthusiasm of democrat supporters against Donald Trump’s attack against mail-in vote and expansion of voters’ education for months led to the surge in mail-in voting.

Christian Ulvert, a Democratic strategist, and founder & president of EDGE Communications LLC, Miami, Florida, says voting pattern appears to have a shift during this election.

“We are probably going to see about 80 percent voter turnout this election,” Christian Ulvert said.

Analysts say US elections depend on electoral votes, not the national popular votes. That means, in the states, people vote the electors who form Electoral College of 535. Including three additional electors from the District of Columbia, a total of 538 electors elect the President. Any party having majority electors in a state means all the electors will vote for the winning party.

“No matter who the president is, we are going to see high turnout of voters. I hope this stays for decades. Hopefully, Democrats as well as Republicans appreciate this,” said Christian Ulvert.