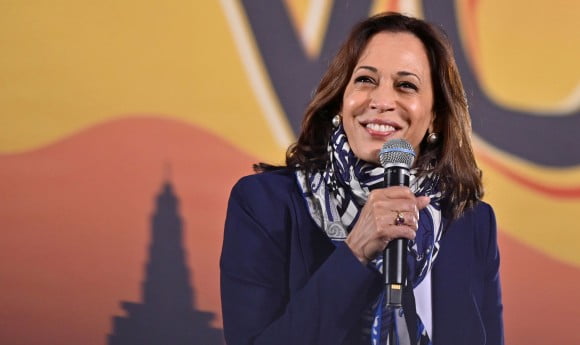 Before the elections, a five-year-old boy asked his mother, my friend, if he would ever be able to be the President of the United States because of the colour of his Brown skin. This is a question that American girls, too, have been asking their parents forever.

That’s because they have never seen themselves represented at that level.

That is about to change as Kamala Harris is set to become the first woman, the first Black person, and the first Brown person to become the Vice President of the United States. The excitement, if the celebrations in my neighbourhood are anything to go by, is electric.

But it hasn’t come easy.

The intersectional biases that have been exposed in response to Kamala Harris’s VP nomination underscore the experience of Black and Brown women in America. Donald Trump called her a monster, twice, paying homage to the racist, dehumanising idea that Black people are dangerous. Radio host Rush Limbaugh accused her of “sleeping her way up,” as if women of colour cannot advance their careers in any other way. TV talk-show host Tucker Carlson termed her a “phony,” in an obvious attempt to question her citizenship, and then went so far as to accuse her of going after the presidency. Not surprisingly, Twitter mobs launched a “birther” attack popularised during the Obama regime.

With Kamala Harris’s rise we are reminded of the identity policing to which we are all subjected as women of colour. Forever “Others”, many Bangladeshi immigrants and their children have been coerced to “assimilate” and aspire to whiteness. Accordingly, many of our immigrant friends and family in the Unites States buy into the myth of meritocracy and hard work. They see the United States as a land of opportunity. Now, they will point at Kamala Harris and imagine that we too can rise to her level. That’s why representation matters.

But that is also where tokenism fails us.

When one Kamala Harris rises (or is allowed to rise), she becomes the face of “equality” when none exists—white men continue to dominate US politics even as record numbers of women candidates have participated this election season. Women represent less than third of both the House and Senate candidates, but 50 percent of the population. Meanwhile, Black and Brown women representatives are so few and far between that when there are a handful of them, they get their own name (the “Squad”, featuring Ilhan Omar, Alexandria Ocasio-Cortez, Ayanna Pressley, and Rashida Tlaib). This is what diversity without inclusion and equity looks like. It is meant to pacify all of us who believe in the value of racial justice.

And it works, for the most part. If Kamala Harris can do it, so can we, we believe, without considering that this is exactly why she’s been put there. When we fail to succeed in our endeavours—indeed, not all Brown immigrants from South Asia, indeed Bangladesh, are typically “successful”—we look at ourselves as the problem, not the structural barriers that are meant to keep us in our place, keep us busy, keep us apolitical, like good immigrants, with our heads down, forever trying to appease the master. And when we question it, we are directed to Kamala Harris and the members of the Squad. Their success is used against us. We are reminded that we are responsible for our failures. In this land of opportunity, we just didn’t work hard enough.

We must break these myths. And the only way to do so is by continuing the fight for racial justice, dismantling the systems that produce (racial) inequity. Certain gains have been made this election season that will directly benefit the working class, spurred, no doubt, by the social mobilisation and uprising this summer. For example, Florida, Portland, and Maine voted to eventually raise the minimum wage to USD 15 an hour, for rent control, and against the use of facial recognition software for surveillance purposes. All members of the Squad were re-elected. Pramila Jayapal, whose key platform is “Medicare for All”, and Ed Markey, a co-sponsor of the Green New Deal, were elected. Many referendums were passed to fund public schools through higher taxes, including in red states. These are all good news, and proof that organising works. But these are not enough.

As the Biden-Harris administration gets ready for business (because what else is it under capitalism?), we must hold them to their election promises: paths to citizenship for those classified as undocumented, health care for all, a judicious response to Covid-19. These are all intersectional issues of race, gender, and immigration. Undocumented workers are used as cheap labour but compensated poorly, without benefits, while unaccompanied children remain anxious about the future of DACA (Deferred Action for Childhood Arrivals). Meanwhile, migrant families torn apart are still waiting to be reunited. Black and Brown people continue to die from Covid-19 at disproportionately higher rates than their white counterparts. Black, indigenous and other people of colour are routinely denied proper healthcare—they are either ignored or treated with aggressive solutions—while the United States is the only OECD nation with a rising maternal death rate.

Structurally, we demand anti-racist practices and equitable policies across the board. Kamala Harris has already promised to “root out systemic racism.” Our job is to hold the administration accountable. We demand the dismantling of racist institutions, such as the system of policing. We demand housing justice, economic justice, and climate justice. We demand reparations for Black Americans. We demand that Guantanamo Bay is demolished. We demand that all policies are reviewed through the lens of racial equity. Start by asking, does this policy harm members of different social identity groups? Can human bias at the provider level result in disproportionate outcomes for different groups? When policies are found to be inequitable, they must be revised or abolished as needed. A diverse body of experts must be hired to do this work.

Individually, we cannot be satisfied with crumbs—economic successes which divert attention from the entire loaf of bread: a just and equitable society.

An increasing number of young Bangladeshi Americans are working to that end. For example, Sahana Hanif is running to represent Brooklyn’s 39th District in the New York City council, while Bangladeshi Americans for Political Progress (BAPP) has been working to “create a Bangladeshi-American voting bloc in New York to elect political candidates and advocate for legislation that protects and advances the well-being of working-class and low-income communities.” But we must also reckon with the idea that many of us align with conservative values. Abortion, for example, while not a political issue in Bangladesh, becomes one in the United States, while fiscal conservatism is appealing as it is “the smart thing to do.”

What this election season tells us is that the United States is a deeply divided country. We see that in our personal lives, too. Like most of my white friends, many of my Bangladeshi immigrant friends and I have relatives or even friends who vote with their bank accounts and stock options, voting against the interests of their communities. Even if they don’t believe in it (sometimes they do), they accept the anti-Black racism, misogyny, Islamophobia, anti-immigration sentiments, and other forms of bigotry for financial gain. Why does that matter? I have heard them ask. Somehow it is not clear to them that racist policymakers make racist, inequitable policies. But that is what capitalism does. It makes economic achievement the only acceptable form of success, one that has to be achieved at all costs.

We have to start “talking to our cousins,” as they say, remind them that immigrants have forever been used to drive a wedge between racial groups, between whites and Blacks, remind them of the role that the rhetoric around “good” and “bad” immigrants has had in dividing our own communities.

This election season we have all had to clean house. By next election, maybe we won’t need to. By then, we will no longer be pawns sacrificing ourselves for white supremacy’s reign.

As I was walking back home from the celebrations on Saturday night, I spotted an elderly woman in a hijab, maybe of Bangladeshi descent, sitting on a folding chair in the middle of Bidwell Parkway. In her hand she held a gigantic rainbow flag as the crowd roared around her.

It made me think: we got this.