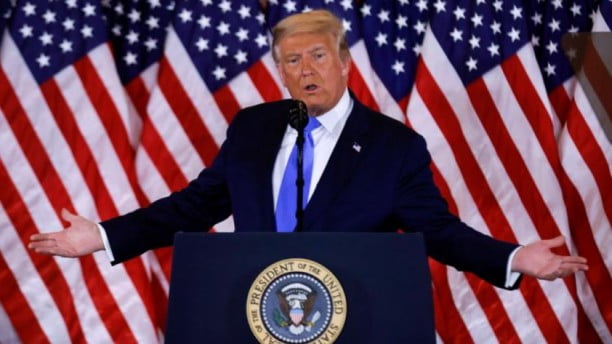 A judge has tossed a lawsuit brought by US President Donald Trump’s campaign in hopes of halting vote-counting in Michigan.

Michigan Court of Claims Judge Cynthia Stephens made the ruling during a court hearing on Thursday. She said she planned to issue a written ruling on Friday.

“I have no basis to find that there is a substantial likelihood of success on the merits,” Stephens said.

Campaign officials for Trump have said they filed the suit to stop the counting in Michigan and gain greater access to the tabulation process.

“It has no other purpose than to confuse the public about what’s taking place and to support their baseless claims of irregularity,” Bauer said in a call with reporters.

Nationally, Biden inched closer to victory on Thursday in an exceedingly close US election hinging on razor-thin margins in a handful of states.

Trump has launched a flurry of lawsuits across the country.

In another setback for Trump on Thursday, a judge in Georgia denied a request by his campaign for an order requiring Chatham County to separate and secure late-arriving ballots to ensure they are not counted.

A Trump campaign spokeswoman did not immediately respond to requests for comment on the Georgia and Michigan rulings.

Lawsuits unlikely to impact outcome of US election, but might slow defeat

President Donald Trump called in his lawyers to shore up his dimming re-election prospects, but legal experts said the flurry of lawsuits had little chance of changing the outcome but might cast doubt on the process.

As Trump’s paths to victory narrowed, his campaign on Thursday was ramping up legal challenges and filed its latest case in Nevada.

On Wednesday, the campaign sued in Michigan, Pennsylvania and Georgia and asked to join a pending case at the US Supreme Court.

Experts said the litigation serves to drag out the vote count and postpone major media from declaring Biden the victor, which would have dire political implications for Trump.

“The current legal maneuvering is mainly a way for the Trump campaign to try to extend the ball game in the long-shot hope that some serious anomaly will emerge,” said Robert Yablon, a professor at the University of Wisconsin-Madison Law School. “As of now, we haven’t seen any indication of systematic irregularities in the vote count.”

Trump campaign manager Bill Stepien said in a statement Wednesday the lawsuits were aimed at ensuring legal votes were counted.

“The lawsuits are meritless,” said Bob Bauer, who is part of Biden’s legal team. “They’re intended to give the Trump campaign the opportunity to argue the vote count should stop. It is not going to stop.”

Ultimately, for the lawsuits to have an impact, the race would have to hang on the outcome of one or two states separated by a few thousand votes, according to experts.

In Michigan and Pennsylvania, Trump asked courts to temporarily halt the vote counts because the campaign’s observers were allegedly denied access to the counting process.

At the Supreme Court, the campaign is seeking to invalidate mail-in votes in Pennsylvania that are postmarked by Election Day but arrive by the end of Friday.

In Georgia, the Trump campaign asked a judge to require Chatham County to separate late-arriving ballots to ensure they were not counted.

The Georgia case was dismissed on Thursday, according to the Associated Press.

“There is no consistent strategy there,” said Jessica Levinson, a professor at Loyola Law School in Los Angeles. She said the campaign was “throwing theories at a wall to see if anything sticks for long enough to muck up the waters.”

Edward Foley, who specializes in election law at the Moritz College of Law, said the cases might have merit but only affected a small number of ballots and procedural issues.

“But merit in that sense is very different from having the kind of consequence that Bush v. Gore did in 2000,” said Foley.

In that case, the Supreme Court reversed a ruling by Florida’s top court that had ordered a manual recount and prompted Democrat Al Gore to concede the election to Republican George W Bush.

The 2000 election was improbably close, with a margin of 537 votes in Florida deciding the outcome.

The campaign is still challenging late arriving mail-in ballots in Pennsylvania, which according to media reports numbered in the hundreds so far, likely too few to have a meaningful impact.

In addition, it appears increasingly likely Biden can win the race even if he loses the state.

Biden is forecast to carry Michigan, according to Edison Research, and stopping the count would do little to help Trump, according to experts.

Michigan’s Secretary of State Jocelyn Benson said Trump’s litigation was aimed undermining a system that appeared poised to deal him a defeat.

“It’s a frivolous lawsuit and it’s really an example of the type of misinformation designed to sow seeds of doubt among our voters about the integrity of our elections process,” said Benson on Wednesday in an interview with TV network MSNBC.

Experts said the lawsuits and claims of fraud might be aimed at softening the sting of being bounced from office by calling the process into question.

“The litigation looks more like an effort to allow Trump to continue rhetorically attempting to delegitimize an electoral loss,” said Joshua Geltzer, a professor at Georgetown Law’s Institute for Constitutional Advocacy & Protection.