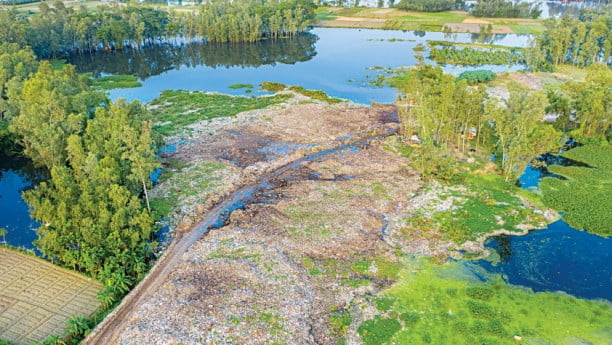 A garbage dump, created on around five bighas of land of an NGO in Bogura, is facing DoE censure for not having an environmental clearance certificate.

Adjacent to the dumpsite is one of the worst polluted rivers in Bogura — the Korotoa. Photos taken by this correspondent show large amounts of garbage floating on the river.

The waste also spills out of the dumpsite and onto the Bogura-Rangpur highway.

Located in the Baghopara area of Bogura Sadar upazila, the garbage dump is also creating a public health hazard for nearby residents and travellers for the last five years.

“This is not a formal dumping station for the municipality and TMSS. We urged them to shift it to another safer place,” said Md Ashrafuzzaman, director at the Rajshahi divisional office of Department of Environment (DoE).

“They cannot pollute the environment and river,” he told The Daily Star.

According to the Bogura municipality sources, at least 120 trucks with the capacity of 250-300 tonnes dump garbage at the Baghopara site every day.

“The municipality and TMSS are dumping all sorts of garbage — including medical and industrial waste — on the bank of the Korotoa — and this is mixing with river water when it rains or floods,” said Masud Rana, senior chemist of DoE, Bogura.

IMPACT ON PUBLIC AND PRIVATE LIFE

Md Afzal Hossain, 53, a resident of Uttar Baghopara village, said, “Because of the bad odour, we can hardly sleep at night even after shutting all the doors and windows.”

Several thousand people in the village suffer due to the dumpsite’s foul odour. It also attracts flies — another nuisance for the villagers.

“People of Uttar Baghopara and students of the Pundra University of Science and Technology protested last year but TMSS and the municipality did nothing to address it,” said 25-year-old Ujjal Shaha.

Nunu Mia, 50, said it is hampering their social and family life.

“Most of our relatives, including our daughters and their husbands, don’t visit us and stay at our home due to the odour,” he added.

A local medical official said the garbage odour can cause pressure on the nervous system and so lead to irritation to the eyes, nose, and throat.

Abdul Wadud, assistant director of the Shaheed Ziaur Rahman Medical College Hospital in Bogura, said, “If odours spread through air and water, it can also lead to airborne and waterborne disease for humans and other living beings.

“Besides, diseases can also spread among people through insects and flies swarming around in the dump,” he said.

Passers-by on the Bogura-Rangpur highway, a major thoroughfare en route to the northern districts, regularly encounter this unsightly trash dump.

On September 29, the Rajshahi divisional office of the DoE sent two formal notices to TMSS and the Bogura municipality in this regard.

The Daily Star has obtained copies of both the notices.

The letter addressed to the municipality stated that it had no environmental clearance certificate or permission to dump garbage there.

“Without having an environmental clearance certificate, your above mentioned activities have resulted in the possibility of indiscriminate damage to public health and to the environment and ecosystem,” it said.

“In addition, the municipal waste disposal site is adjacent to the highway, which is causing various problems for public movement and creating hazards for locals; this is a punishable offence under the Bangladesh Environment Conservation Act.”

It went on to request the municipal dumping ground to be shifted to a suitable place and that an environmental clearance certificate (ECC) be obtained, both within the next 15 working days.

The letter sent to TMSS executive director reads almost the same, with the exception that it also refers to the NGO dumping of industrial and medical waste.

In response to the DoE notices, TMSS blamed the municipality for forcefully dumping garbage at their site, while the municipality did not reply as of October 28, a month after it was sent, according to a local DoE official.

Neither TMSS nor the municipality stopped dumping garbage there within the given time period, he added.

Mayor AKM Mahbubur Rahman, told The Daily Star that the two formal dumping stations of Bogura municipality had to be closed leaving no other landfill option.

A 22-bigha dump yard in the Arulia area was shut down 12 years ago after the Bogura airport authorities complained about the smell, and a 11-bigha site in the Matidali area was also shut five years ago when TMSS established a school and college near it and urged the authorities to stop dumping garbage there, said the mayor.

Since then, municipal waste has been dumped at the Baghopara station as no other formal landfills remain, he added.

“We applied to the ministry of local government for a new formal dumping station several times but they did not respond yet,” said the mayor.

Regarding disposal of medical waste, Bogura municipality has been under contract with a local NGO called SAPNO, and such waste is not dumped at the Baghopara site over the last one and a half, said municipal sources.

Ziaur Rahman, executive director of SAPNO, confirmed this, also saying the medical waste of municipality area was dumped at Baghopara trash dump at least for three years before this.

Hosne Ara Begum, founder and executive director of TMSS, told The Daily Star, “We invited the municipality to dump their garbage on our Baghopara land, about a quarter of a kilometre from the highway, but their garbage now spills out on the road.

“We urged them to stop but they [the municipality] continue to forcefully dump municipal garbage.”

Hosne Ara refuted the allegation that TMSS dumps medical and industrial waste at the Baghopara site from its hospital and other institutions. “We have our own waste management system,” she said.

Masud Rana of DoE Bogura, however, said neither TMSS nor the municipality has any incinerators to manage their garbage.

Seeking anonymity, an environmental activist of Bogura Bangladesh Poribesh Andolon (BAPA), said, “TMSS invited the municipality to dump garbage on their low-lying land because they want to fill it.”

Recently, the Roads and Highways department too sent a notice to both the municipality and TMSS about the matter.

Md Ashrafuzzaman, executive engineer of Roads and Highway (Bogura), said, “We have served notice to the Bogura municipality and TMSS to remove their garbage 14-15 feet away from the sides of the highway on October 19.”

The Daily Star has also obtained a copy of this notice.

When asked about the pollution of the Korotoa and the highway, the mayor said, “It should not happen; I am looking into the matter.”