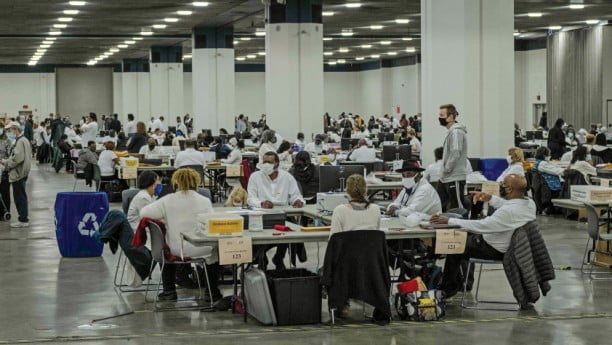 The excruciatingly close US presidential election hung in the balance yesterday, with Democrat Joe Biden leading in two critical Midwestern states that could tip the contest in his favor even as President Donald Trump falsely claimed victory and made unsubstantiated allegations of electoral fraud.

In boost to Biden’s presidential bid, CNN yesterday projected the former vice president to win Wisconsin. Biden also extended his narrow lead in Michigan, according to Edison Research. Trump won both the battleground states in 2016.

Together with Nevada, another state where Biden held a small advantage with votes still left to be tallied, those states would deliver Biden the 270 votes needed in the state-by-state electoral college to win the White House. But Trump still had a path to victory with those states officially undecided.

In dueling conference calls with reporters, officials from each campaign insisted their candidate would prevail.

“If we count all legal ballots, we win,” Trump campaign manager Bill Stepien said, potentially setting the stage for post-election litigation over the counting of mail-in ballots.

“We’re going to defend this vote, the vote by which Joe Biden has been elected to the presidency,” said Bauer, adding that the campaign’s legal team was prepared for any challenge.

Biden is expected to deliver an address today.

Trump continued to make baseless attacks on the vote-counting process on Twitter yesterday, hours after he appeared at the White House and declared victory in an election that was far from decided. Both Facebook and Twitter flagged multiple posts from the president for promoting misleading claims.

“We were getting ready to win this election. Frankly, we did win this election,” Trump said before launching an extraordinary attack on the electoral process by a sitting president. “This is a major fraud on our nation. We want the law to be used in a proper manner. So we’ll be going to the US Supreme Court. We want all voting to stop.”

Trump provided no evidence to back up his claim of fraud and did not explain how he would fight the results at the Supreme Court, which does not hear direct challenges.

At the moment, Biden leads 237 to 213 over Trump in the electoral college vote count, according to CNN, aiming to reach the needed 270 electoral votes.

The US Elections Project estimated total turnout at a record 160 million voters including more than 101.1 million early voters, 65.2 million of whom voted by mail.

The uncertainty only added to the anxiety many Americans were feeling following a vitriolic campaign that unfolded amid a pandemic that has killed more than 231,000 Americans and left millions more jobless. The country has also grappled with months of unrest involving protests over racism and police brutality.

Jeff Brower, 48, a registered independent in Atlanta, stayed up past midnight fretting about the vote count in Georgia, where officials are still tallying ballots.

“I woke up feeling as anxious as ever,” said Brower, who owns a general contracting business and voted for Biden. “This election is crucial to the future of America.”

Biden’s hopes of a decisive early victory were dashed on Tuesday evening when Trump won the battlegrounds of Florida, Ohio and Texas.

Biden led in the battleground states of Arizona, a state with a high Latino population, which would make him only the second Democratic presidential candidate to win the state in 72 years. Trump won the state in 2016.

The election will now come down in large part to two of the “blue wall” states that unexpectedly sent Trump to the White House in 2016 – Michigan, Pennsylvania.

In Pennsylvania, where Trump led with more by than half a million votes yesterday, officials said they were slowly working their way through millions of mail-in ballots, which were seen as likely to benefit Biden.

Across the state, vote counting was proceeding more slowly in Democratic-leaning counties.

“The delay that we’re seeing is a sign that the system is working,” Democratic Governor Tom Wolf said at a news conference.

Officials in Michigan yesterday said they expected the state to complete its count by day’s end. Trump’s campaign  yesterday said it had asked a court to stop the counting of votes there, where Biden holds a thin lead.

Among other undecided states, Nevada does not expect to update its vote count until Thursday, state officials said. Two Southern states, Georgia and North Carolina, also remain in play; Trump held leads in both.

It was not clear what Trump meant by saying overnight that he would ask the Supreme Court to halt “voting”. The high court does not hear direct challenges but instead reviews cases that have worked their way up from lower courts.

However, legal experts have said the election outcome could get bogged down in state-by-state litigation over a host of issues, including whether states can include late-arriving ballots that were mailed by election day.

Even before Tuesday, the 2020 campaign saw a historic number of lawsuits across dozens of states, as the pandemic forced election officials to prepare for an election like no other. Both campaigns have marshaled teams of lawyers in preparation for any disputes.

The Supreme Court previously allowed Pennsylvania to move forward with a plan to count ballots mailed by election day that arrive up to three days later, but some conservative justices suggested they would be willing to reconsider the matter. State officials planned to segregate those ballots as a precaution.

Ahead of the election, Trump had said he wanted his latest US Supreme Court appointee, Amy Coney Barrett, confirmed by the Senate in case the court had to hear any electoral dispute. Democrats had criticized the president for appearing to suggest he expected Barrett to rule in his favor.

Trump has repeatedly said without evidence that widespread mail-in voting will lead to fraud, although US election experts say fraud is very rare.

Trump’s strong performance in Florida, a must-win state for his re-election, was powered by his improved numbers with Latinos.