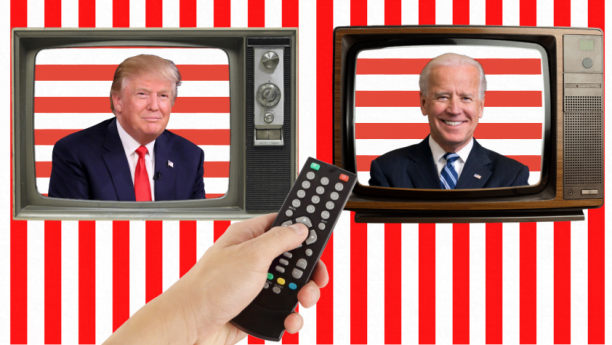 The lens through which we look at politics is far from uniform. Some of us care about it too much, some of us don’t care at all. To many, politics today is a collection of squabbles between elites who have no intention of making real progress for the masses. For some, politics is the vessel on which social progress will be achieved.

Looking at the US presidential election over the last couple of months however, I’ve realised there’s another way of looking at all of this. The politics in the United States of America and the coverage surrounding it makes for excellent entertainment, at least from an outsider’s point of view.

IT’S ON ALL DAY — EVERYDAY, EVERYWHERE

The US media, with its enormous scale and riches, and its variety of alignment on the political spectrum, is ideally poised to cover an election that the entire world may be interested in. And boy, do they do a thorough job! (By the way, thorough does not always mean good.)

The primaries began early, and the way almost every candidate got significant air time, how everyone had a selling point and a scandal to boot meant there was always a steady stream of content. As the election approached, the race became smaller, and viewers got an even closer look at the candidates.

This is where the variety in bias in the US media found its moment of glory. You want flashy graphics and dramatic reactions with relatively little substance? You got CNN. You want to look at it from the progressive point of view? MSNBC got you covered. You want to know what it is really that makes people support Donald Trump? Fox News! Maybe you’re a person who realises that it’s money that runs the world so you want to learn about the business side of this election? Tune in to CNBC. Are you a sucker for numbers and polling data? FiveThirtyEight is your poison. Maybe you want none of that, you just want a summary of the news and a good laugh, late night shows in the US have been doing this for decades. Sit back and enjoy.

The fact that all these mediums are also available on YouTube for you, me, and the entire world makes it almost difficult to not indulge in this madness. Let us not forget that these TV networks, the complimentary YouTube community that comes with it, and social media in general, are also constantly talking about each other, turning the entire coverage into something akin to a performance. It’s a back and forth between many participants, creating dynamics and inner storylines that have entertainment value of their own.

THE STORY IS FULL OF TWISTS AND TURNS

This year, I found out about the October Surprise. Even though it sounds delightful, it’s almost sinister that this is an actual thing in the US elections. It’s almost anticipated like a play-off draw in a sports competition, or a wildcard in a reality TV show.

In 2016, the October Surprise was an FBI investigation into Hillary Clinton’s emails. This year, it was the emails again, but this time it had something to do with Joe Biden’s son Hunter Biden’s emails. There was a full-blown conspiracy in the works with a Ukrainian company, secret hard drives and the whole shebang. But then, if this was expected, is it really a twist? Of course not, the twist is in how the election ecosystem reacted to the October Surprise. It was discarded, ridiculed as a sorry attempt, and ended up having little impact on the polls.

It was a twist within a surprise, and the double whammy that the Republicans got served because of it, once again, made for excellent TV.

This whole election has been full of twists and surprises. Who could forget Trump’s attempts at downplaying the coronavirus pandemic before he himself got diagnosed with Covid-19? The environment surrounding this bombshell was sombre, when once again, in a strange twist, he was out of the hospital and campaigning within a week. Then, there was the death of a Supreme Court justice, which was not much of a surprise given her age, but the speed at which her replacement got appointed left everyone dumbstruck.

Close to the election, news arrived from Texas of all places that it might go to Democrats this time, an alien-like possibility. All this and so much more has happened that no one could have predicted. If this were a season of Veep, they’d have gotten criticism for bad writing.

If we were to look at American elections as a story, each of the characters deserve a special mention. They are all interesting; you can make movies about them. Even the side characters are amazing, like Sen. Bernie Sanders, a self-proclaimed socialist who, every time he opens his mouth, counts off percentage figures like a school essay in the 7th grade. He almost became the Democratic candidate for presidency, TWICE!

Mayor Pete Buttigieg, a soft spoken man with the meanest takedowns, overcame doubts surrounding his age and experience and found himself in the limelight. On the other hand, there are people like Sen. Lindsey Graham, who has spewed so many contradictory things on record within such a short period of time, he had to be acting for some of it, right?

Looking at the lead roles, Joe Biden’s life has been dictated by tremendous tragedy, but he finds himself on the cusp of superb power, and leading a progressive movement he’s never actually been a part of in almost five decades of politics. Then there’s the main man, President Donald Trump. He is incredible in many ways, but specifically, I have found myself wondering if even a TV show could get away with putting an old man with a history of sexual harassment in the seat of the US presidency. But then I remembered House of Cards and Kevin Spacey, and I went “Ugh!”

IT’S SOMETHING WE ALL CARE ABOUT

Even though it’s a faraway country in a land very different from ours, there are good reasons to care about the USA. We have families and friends living there, many students over here aim to pursue higher education in America. It is still the second highest carbon emitter in the world, and if we want to fight the global spectre of climate change, America’s climate policy is of real importance to us. Beyond all that, the level of media coverage of US politics exposes issues that we often don’t get to think about in our political climate.

The world is really interconnected, and many social trends dictating politics thousands of miles away could exist undetected among us as well, in our own localised version. America’s version of freedom of speech allows them to package politics in a way that’s often entertaining, which gives us the chance to make sense of things in a way that’s not afforded to us by our media. The reason media coverage of US politics is interesting to us may just be because its contents are real, what happens there impacts all of us in some shape or form.

The writer is a sub-editor at SHOUT, The Daily Star. Reach him at azminazran@gmail.com with election predictions and other political discussions.