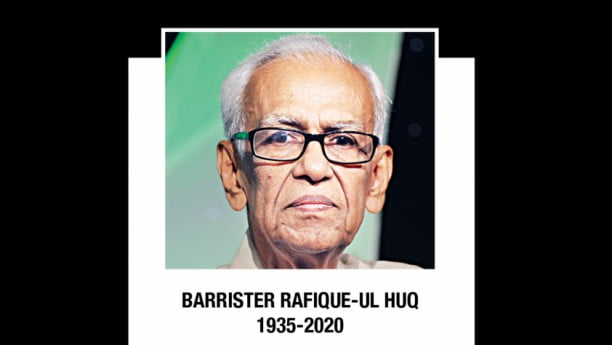 In a country where political divisions go deep down, he was one of the very few personalities from any profession who was trusted by all sides of the political spectrum. It speaks volumes of his wisdom, sagacity, impartiality and sense of fairness that political archrivals sought his legal counsel in situations of crisis.

He did not belong to any political party, but he had the unique honour of representing in court all the prominent political leaders in the country, including the present and former prime ministers Sheikh Hasina and Khaleda Zia.

The eminent jurist, who was also known for philanthropy, breathed his last around 8:30am at the intensive care unit (ICU) of Ad-Din Hospital, said Dr Nahida Yeasmin, a director there. Rafique-Ul Huq was the chairman of the private hospital in the capital.

He was admitted there with urinary tract infection and old-age complications on October 15. After his condition improved, he was released two days later. He, however, was admitted again the following day and put on life support in the early hours of Wednesday, said his colleagues.

After his namaz-e-janaza on the Supreme Court Bar Association premises, the senior lawyer was laid to eternal rest at the capital’s Banani graveyard in the afternoon yesterday. People of all walks of life went there to pay rich tributes to him.

He left behind his son Barrister Fahim-Ul Huq and a host of admirers. His wife Prof Farida Huq, whom he had married in 1960, died in 2011.

In a career spanning over more than five decades, Rafique-Ul Huq took charge of many important and high-profile cases successfully, which earned him preeminence as a senior lawyer.

In 2007, he moved cases and fought legal battles on behalf of Awami League President Sheikh Hasina and BNP Chairperson Khaleda Zia before the Supreme Court after they were detained during the military-backed caretaker government.

Rafique-Ul Huq was born in Kolkata (then Calcutta) of India in 1935 and obtained his law degree in 1960 from Calcutta University. He started practicing law at the High Court in Dhaka in 1962 and was made a senior advocate of the Appellate Division in 1975.

He served as the attorney general of Bangladesh from April 7, 1990 to December 17, 1990, and as the chairman of the Bar Council of Bangladesh that year.

Of his various roles as a social worker, Barrister Rafique-Ul Huq was a life-time member of Diabetic Association of Bangladesh and a member of its national council since 1976. He was also the vice-chairman of Diabetic Association of Bangladesh for the last 28 years, chairman of Management Committee of BIRDEM Hospital, member of Management Board of Dhaka Shishu Hospital, Dhaka (up to 1986) and Patron of Dhaka Shishu Hospital, Dhaka.

He was also a cabinet member of the Lions International, District 315. He discharged duties in various capacities, including zone chairman, chairman of Society for Education and Care of Hearing Impaired Children of Bangladesh; life-time member, Bangladesh National Society for the Blinds, Dhaka; founder of Dr Farida Huq Memorial Hospital, Chandra, Gazipur; founder of Jatir Pita Bangabandhu School and College at Chandra, Gazipur.

In a condolence message, President Abdul Hamid said Barrister Rafique-Ul had a huge contribution in establishing the rule of law in the country.

“Bangladesh has lost an eminent lawyer,” said Hamid, who is now on an 11-day medical checkup in Dubai since October 14, reports BSS.

The head of the state prayed for the eternal peace of the departed soul and conveyed deep sympathy to the bereaved family.

In her message of condolence, Prime Minister Sheikh Hasina said, “Barrister Rafique-Ul Huq used to give advices on important issues regarding the Constitution.”

The prime minister recalled his role with due gratitude as he came forward to fight legal battles to have her released from jail following her arrest in 2007 by the then caretaker government, adds BSS.

“He was a symbol of punctuality and professionalism as he would always appear before the court well prepared,” he said.

The AG said Barrister Rafique-Ul Huq contributed immensely to the law profession and assisted the court by providing interpretation of laws and constitution in times of need.

Former SCBA president Zainul Abedin said with Rafique-UL’s demise, the nation has lost one of its greatest lawyers.