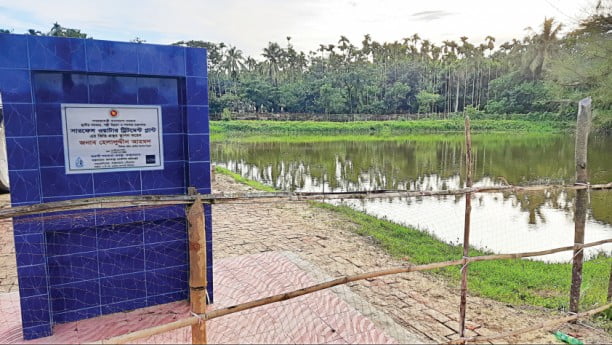 The land acquisition office of Cox’s Bazar acquired 1.171 acres of disputed land from the wife and brother-in-law of the municipality mayor at Tk 36 crore for a project in violation of multiple acquisition and property transfer laws.

The market price for equivalent land in the area is approximately Tk 2 crore.

The land acquisition started in October last year for the Tk 150-crore project to build a surface water treatment plant, being implemented by Cox’s Bazar Municipality.

Project documents obtained and analysed by The Daily Star show Mujibor Rahman, the mayor of Cox’s Bazar, lobbied for the site in Jhilongjha area even though it was 11 times more expensive than an alternative proposed.

The original owners, as identified in documents, claim they did not even know that their plots had been acquired from a third party until they saw government officials on their land.

The five are the owners as per RS and BS surveys. But there are disputes over who will get what share and cases are pending.

“Due to several cases over the land, it was under the supervision of the state. Before settlement of the dispute, this land cannot be sold,” said one of the owners of plot No 838, on condition of anonymity.

As per the Transfer of Property Act-1882, such disputed land cannot be sold or transferred by any party.

The owners in 1986 filed partition suits with the Joint Session Judge’s Court in Cox’s Bazar, which a few years later appointed a receiver — assistant commissioner (land) of the upazila concerned — for the land until the suits are resolved.

Despite all this, mayor’s wife Farhana Akhtar and his brother-in-law Mizanur Rahman were able to sell eight plots from the disputed land to the land acquisition office.

After the land acquisition began, the owners also moved the High Court on December 19, 2019.

“Those who claim they purchased the land could not show any papers proving that we had sold our land to them, when we went to the High Court protesting the irregularity,” said the owner, taking to this newspaper.

BEGINNING OF THE SCAM

The municipality acquired a total of 2.1750 acres of land in Rubber Dam area of Jhilongjha at 11 times the cost of another site proposed for the project.  The Daily Star has documents that confirm 1.171 acres of it was acquired from Farhana and Mizan.

In a letter sent by the then mayor Sarwar Kamal on April 19, 2015 to Md Abdul Halim Khan, project director at the Department of Public Health Engineering, two sites were proposed — one at PM Khali and the second at Jhilongjha.

Despite the huge discrepancy in costs, Mujibor Rahman started to lobby for the site in Jhilongjha after he assumed office in August 2018.

As per the minutes of a meeting held at Cox’s Bazar office of the Department of Public Health Engineering on May 14, 2019, he urged Abdul Halim Khan to speed up the process to acquire the land at Jhilongjha.

“As water table is receding fast in Cox’s Bazar, I request to accelerate the steps to implement the project at Jhilongjha mouja,” he said.

In a letter signed by the mayor and sent to the project director at the Department of Public Health Engineering on June 13, 2019, the price per decimal of land was shown to be Tk 5,57,236, several times higher than the market price.

As per the land acquisition rules, the owner gets three times the original rate when the land is acquired and that’s how the price for 1.171 acres finally stood at Tk 36 crore.

Later in the same month, Ashraful Afsar, the then additional deputy commissioner (revenue), also visited the spot, and recommended the land for acquisition, overlooking the legal issues.

They did not even explore the alternative site for the project.

The Daily Star obtained a copy of the minutes of a district land allocation committee meeting held at the DC office on September 30 last year.

The meeting minutes show that additional deputy commissioner (revenue) wrote to Deputy Commissioner Kamal Hossen, recommending the land be acquired for the project.

“The ADC (revenue) forwarded his recommendation to facilitate the acquisition. The papers relating to the land were found correct. In the presence of all parties a unanimous decision to acquire 2.1750 acres of land at Jhilongjha mouja is taken,” concludes the meeting minutes, which was signed by the DC.

Mayor Mujibor Rahman proposed the site for acquisition in a letter sent to the Cox’s Bazar DC on July 17, 2019.

Using his clout, he had the land mutation done on October 2, 2019, recording the names of Farhana and Mizan as the owners, according to land documents and land office sources.

As per the land acquisition order sheet, the office concerned issued a notice for the acquisition on October 28, 2019.

The land office of Cox’s Bazar Sadar upazila mutated the land knowing all legal issues involved. The original owners lodged complaints with the ADC (revenue) against the mutation a few days after the mutation.

But the ADC (revenue) did not dispose of the complaints. Rather, he released a cheque for Farhana and Mizan.

The district land allocation committee headed by DC Kamal Hossen was aware of the disputes surrounding the land acquired, according to the order sheet, which contains all information from the land acquisition to settlement of acquisition.

The order sheet prepared by the district administration, in fact, mentions the reservations about the land acquisition procedure.

“Four reservations were found so far — between October 27 and November 18 [a period in 2019 during which the district administration asked people to raise complaints, if any]. They [claimants] requested that the land not be acquired as there are multiple claims on the land,” says the order sheet.

Shah Alam, a claimant of a disputed plot, told The Daily Star that his family filed a case for the land to be partitioned off among the claimants in 1986. Since then, the court had appointed the assistant commissioner (land) of their upazila as a custodian of the land.

“I received a notice in October last year that the government wants to acquire the land. But to my utter shock, I learnt that the ownership of the land had been transferred to another party. But being a disputed land, there is no scope for anybody to mutate or register the land as per the acquisition law,” he said.

“I lodged a complaint with the district administration against the mutation and filed a writ with the High Court, which ordered disposal of the issue within 30 days. Following the order, they included me in the registrar but are procrastinating over the payment for the last seven months.”

Official sources said the land acquisition office has already released Tk 8 crore to Farhana and Mizan and the process to release another 28 crore got slowed down due to an Anti-Corruption Commission (ACC) investigation.

Contacted on October 24, DC Kamal Hossen said he can’t make any comment without going through the order sheet.

When told that the order sheet mentions reservations about the land acquisition, he said there were about 75 big and small projects in his area and “I can’t say anything without seeing the papers”.

“I am giving you the phone number of my official concerned; you better talk to him,” he said and hung up the call.

This correspondent never got that number.

Muhammad Shahriar Muktar, assistant commissioner (land) of Cox’s Bazar Sadar, told The Daily Star earlier that he was not aware of any legal prohibition in mutating that land.

When this correspondent reminded him of the cases over the acquired land, he cut short the conversation, saying, “Sorry, the case is under ACC investigation. I can’t say anything further.”

Shamim Hasan, land acquisition officer in charge of the acquisition, who had told the administration after visiting the site that there was no dispute over the land, said, “The law does not allow me to talk to the media without permission of my superior.”

Asked how the Tk 8 crore was released despite a dispute over the land, former ADC (revenue) Ashraful Afsar, said, “As far as I know if there is any reservation or case over the land, the payment won’t be released. I have to investigate the matter.”

Recently, Afsar has been promoted to deputy secretary of science and technology ministry.

Mizan, brother-in-law of Mayor Mujibor, hung up the phone call when this correspondent introduced himself as a journalist.

Mujibor, as a mayoral candidate, had submitted an affidavit on June 24, 2018 to the Election Commission, where his wife’s profession was listed as that of homemaker.

In just two years, Farhana and her brother bought 63 decimals from the disputed land spending Tk 2,75,94,000, according to one sale deed obtained by this newspaper.

It raises the question how she and her brother, who is known to have no fixed job, managed to earn so much money.

The Daily Star could not get his comment as both his phones were found switched off for the last 15 days. His wife also could not be reached for comments.