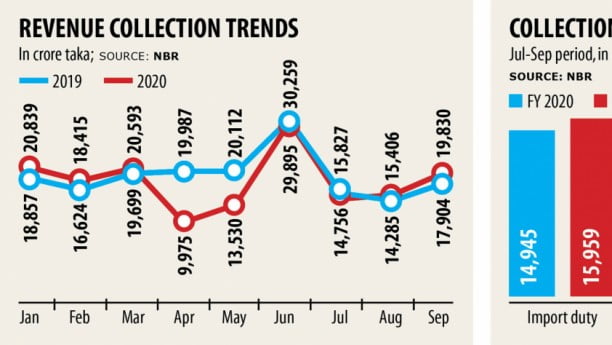 Tax collection jumped in September as the country’s businesses and economic activities continued to pick up despite all the uncertainty caused by the ongoing Covid-19 pandemic.

Last month, the National Board of Revenue (NBR) collected Tk 19,830 crore as tax, an 11 per cent increase compared to the same period a year ago, when it was Tk 17,904 crore, according to the NBR’s provisional collection data.

“It indicates that real economic activities are picking up compared to the same period of last year,” he said.

This was the second consecutive month when revenue collection grew after remaining in the negative for four months since April, owing to the coronavirus-induced shutdown and slump in domestic and global demand.

The amount of tax collected reached Tk 9,975 crore in April, the lowest since January 2019.

Mansur, a former economist at International Monetary Fund, expected that activities would pick up as businesses such as restaurants were reopening.

“There has also been a significant increase in road traffic,” he said.

During the July-September period, taxmen collected a total of Tk 49,990 crore, up 4 per cent from Tk 48,017 crore in the same month in the year prior, the NBR data shows.

Import duty payments by businesses soared 7 per cent year-on-year to Tk 15,959 crore in the July-September period (the first quarter of the fiscal year) compared to the same period a year ago.

Taxmen also collected a higher amount in taxes from individuals and companies during the same period.

Collection of VAT, the biggest source of revenue, had been downbeat until August this year.

However, VAT collection soared in September, enabling the NBR to post a 1.19 per cent higher collection of the indirect tax in the first three months of fiscal 2020-21.

Until the July-August period, income tax receipts had been in the negative. In September, collection of the direct tax soared 14 per cent.

Against this backdrop, overall income tax collection grew 5 per cent year-on-year to Tk 15,919 crore in the July-September period of fiscal 2020-21 compared to that a year ago, according to the NBR data.

However, VAT receipts must grow by 10 per cent this fiscal for the economy to grow by 4 per cent, Mansur said.

Md Anwar Hossain, director general (research and statistics) of the NBR, said close monitoring by the revenue authority enhanced the growth of revenue.

Imports drove the revenue collection growth and more imports will eventually lead to increased collection of VAT and income tax, he added.

Despite the increased collection, the gap between collection and target has further widened.

The NBR lagged behind by Tk 13,724 crore from its collection target of Tk 63,714 crore in the July-September pewriod, according to its provisional data.