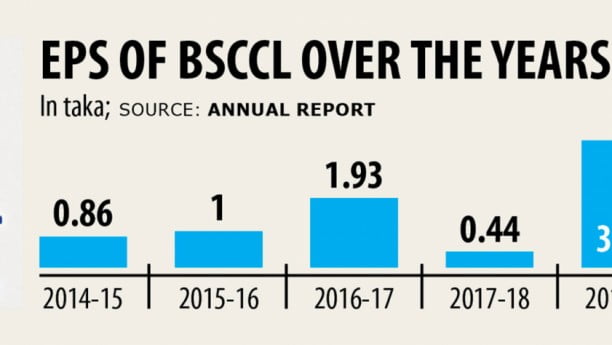 Bangladesh Submarine Cable Company Ltd (BSCCL) has overstated its earnings per share (EPS) and net asset value (NAV) without issuing stocks against the share money deposit of Tk 166 crore, according to an audit report.

A share money deposit is the money paid in exchange for shares that have not been acquired yet.

The state-run BSCCL was audited by SF Ahmed & Co, which gave its qualified opinion in the report for the year that ended on June 30, 2020.

A qualified opinion is given once the auditor finds that the data presented in the financial statement is not complying with the standard accounting norms.

The BSCCL showed EPS of

Tk 5.80 and NAV of Tk 40.93 for the year and on the basis of those earnings, it announced 20 per cent cash dividend for investors.

“Since the company already took the money from the government, the problem should be eventually resolved,” said Ali Ahmed, a stock investor.

The company’s management should work with the authorities concerned to resolve the issue in a way that might not heavily impact its earnings per share, he added.

If the BSCCL issues shares at face value then the number of stocks would increase greatly, reducing its EPS and dividends as a result, a merchant banker said.

The price could be set by considering the average share price for the last six months, he added.

The fund was meant for implementing the regional submarine telecom project, under which the country’s second submarine cable system would be established.

The money was taken as equity with the condition that the said amount would be converted into equity capital in favour of the posts and telecom ministry by issuing shares.

On February 11, the Financial Reporting Council issued a notification regarding accounting and reporting on share money deposits.

As per the notification, any amount received from an investor as share capital or any other facility considered as equity in financial statements shall be converted to share capital within six months.

Furthermore, until the day the share money deposit is converted into share capital, the amount will be considered as potential shares.

As of June 30, 2020, the BSCCL was yet to convert the Tk 166 crore equity fund into share capital. Besides, it was not considered as potential shares in order to calculate the NAV per share and EPS.

For that reason, as on reporting date both the NAV per share and EPS of the company were overstated, the auditor said.

As the potential share has not been identified by the company’s management, the value overstated on net asset value per share and earnings per share could not be quantified, it added.

The BSCCL appointed ICB Capital Management on July 22 this year as issue manager, regarding the issuance of shares against equity money from the government, the auditor said.

SF Ahmed & Co. reviewed the appointment of valuer for a revaluation of the assets and liabilities of BSCCL.