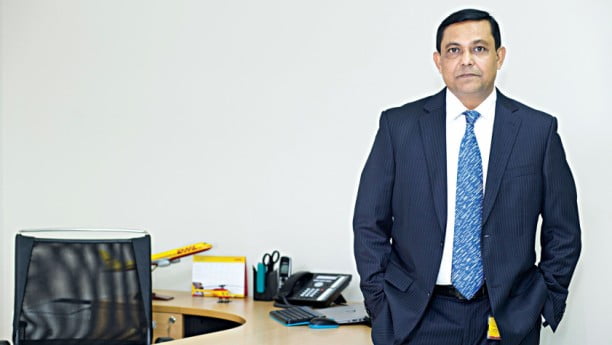 However, the leading logistics company, which operates in more than 220 countries and territories, did not suspend their services for even a day amid the Covid-19 fallout.

According to Md Miarul Haque, managing director of DHL Express Bangladesh, maintaining a structured business process is key to remaining competitive even during times of crisis.

Before the Covid-19 outbreak, the last pandemic took place in 1918, when the H1N1 virus caused the deadliest health crisis in human history.

Given the century wide-gap, the world was underprepared for the Covid-19 but people still learned how to cope with the situation and most companies like DHL Express prioritised the safety of its workers.

Since international companies are usually the first to know about any major development worldwide, DHL Express was prepared for the fallout in early March.

“That’s the advantage of working with a global company,” Haque said.

Although remaining optimistic in times like this is hard, leaders like Haque prefer to keep a stiff upper lip.

The managing director successfully motivated his colleagues by asking them to prove that the DHL motto — Connecting People, Improving Lives — is more than just words.

And so, the DHL management regularly contacts the company’s employees to hear their problems and conduct contact-tracing of the infected.

“But this was never just for business since it helped save many lives as well,” he added.

Haque believes that a structured process is vital for an organisation’s development.

“To transform a company from good to great, a structured process can efficiently and effectively control the expected output,” he said.

A person can learn plenty inside a classroom but that is only 10 per cent of the total process since that knowledge needs to be properly implemented.

The managing director went on to say that in any business, results are vital and even the most charismatic leaders cannot control everything.

“So, I must trust my colleagues and gain their trust by showing respect. When they are engaged, they deliver better results and that eventually creates loyal customers,” Haque said, adding that maintaining this cycle ensures sustainability.

Thinking empathically, providing support and showing credibility will create a moral obligation among the employees to do better, he said.

To move a company forward, seeing the bigger picture while keeping everything aligned with that vision is vital.

To do so, a leader must know the industry, competition and global trends to plan accordingly for his business.

“World leaders set the Sustainable Development Goals (SDGs) and as corporations and even citizens, it is our responsibility to contribute to these,” Haque said.

Unlike the past, companies are now concerned with sustainability, environmental protection and social responsibility, good governance because of the SDGs.

“A leader must understand it first and then make his colleagues understand. Until every employee comprehends the organisation’s shared purpose and direction, the cumulative acceleration can’t be achieved,” Haque said.

DHL Express has been operating in Bangladesh since 1979.  Initially, it ran through agent operations before opening a full-fledged subsidiary in 2008, in an endorsement to the country’s growing importance.

It handles around 70 per cent of all inbound shipments, thus becoming the largest international air courier in the country. The rest is handled by two other international companies represented by local agents and about 30 to 40 local companies.

DHL Express Bangladesh delivers time-sensitive and high value but impactful small parcels and documents within a short time, which support trade facilitation and manufacturing. Currently, it employs more than 550 people.

Haque joined DHL Express Bangladesh in 2001 and after serving in various capacities until July 2017, he replaced the company’s 27-year-long Country Manager Desmond Quiah.

In September last year, he became vice-president and managing director of the company.

Like most other success stories, Haque never dreamt of becoming a managing director during his time as a student.

“I credit my educational base to my mother and sporting zeal to my father. There was always a conflict of education and sports in my life until I got admitted to the cadet college,” he said.

“Dream grows slowly while the radius grows bigger,” he added.

His journey has not been a smooth one though as Haque suffered a brain injury in the final of a boxing competition at the Military Academy in 1989.

Although he won the championship, he was made medically boarded out after 14 months on the training as continuing the long course would have been riskier for him.

He believes that life could have gone very differently has he not returned from the academy.

“At the academy, I learned the process a person goes through. It made me confident. Since then, I feel like there’s nothing impossible for me or any other human being,” Haque said.

He also considers himself fortunate to have started his career with British American Tobacco, where he applied his learnings before DHL Express changed his whole life.

Haque, who studied MBA at the Institute of Business Administration under the Dhaka University, also shared a brilliant philosophy of Jack Ma, which the Alibaba founder disclosed in an interview at the World Economic Forum.

The advice is two-fold: First, hire people who are smarter than you and second, get them to work together.

Haque also believes that foolish people can be made to work together easily as they do not have individual visions whereas smart people are just the opposite.

“A leader’s work is to make these powerful resources work together effectively,” he said.

A keen understanding of a company’s big picture and how various functions are linked is a key component for future chief executive officers (CEOs).

To learn new things, the process of unlearning and then re-learning is important during one’s journey to become CEO, Haque added.

But for the top brass of a global company, bringing all teams together to deliver a common organisational goal is hard.

“A leader must help maintain every function related to the company’s big picture. Once they can relate, they can contribute to the common purpose and even maintain their key performance indicators,” he said.