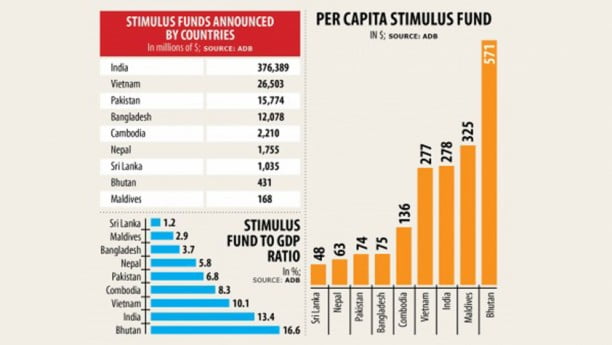 Only 8 per cent of the country’s employed workforce has so far benefitted from the government’s massive stimulus packages, said the Centre for Policy Dialogue yesterday, in a worrying finding as the coronavirus pandemic has wiped away millions of jobs in Bangladesh and caused incomes to collapse.

“The government should expand the volume of the stimulus packages to generate more jobs to help the country get rid of the economic hardship,” it said.

Also, the packages should be designed in a way so that they can support the vulnerable people, it said.

The think-tank came up with the recommendations at a virtual national dialogue styled “Employment implications of stimulus packages: challenges for recovery”.

The CPD, in partnership with the Oxfam International and association with the Citizen’s Platform for SDGs, Bangladesh organised the discussion.

Since the virus arrived at the shores of Bangladesh in March, both the government and the central bank have unveiled 19 stimulus packages worth Tk 113,117 crore, which is 3.74 per cent of the gross domestic product, according to the CPD.

In Bangladesh, there are about 6 crore people engaged in the formal and informal sectors.

“But the packages have failed to create required jobs to help people weather the impacts of the crisis,” the CPD said in a paper.

Only 12 per cent of the workforce will benefit when all of the stimulus packages are materialised, the think-tank said.

“Against the backdrop, the government will have to increase the volume of the stimulus packages to reach out more people,” said Debapriya Bhattacharya, a distinguished fellow of the CPD.

The stimulus fund to the GDP ratio should go up by 1 to 2 percentage points, he said.

A large number of enterprises are yet to know anything about the stimulus programmes due to inadequate publicity, Bhattacharya said.

Non-governmental organisations can play an important role in disseminating the message about the programmes among the marginalised businesses and the low-income groups, he said.

Some of the stimulus packages have failed to generate jobs directly.  “The government may be forced to roll out more stimulus packages in the second phase. Special attention should be given to design the programmes such that various professionals can avail the support,” he said.

Only 4-5 per cent of the country’s population is now shown to be jobless as there is no available data to this end. As much as one-third people had faced unemployment when the lockdown was declared to keep the deadly flu at bay, he said.

“The ratio of employment has been on the rise in recent times, but it is yet to reach a satisfactory level,” said Mustafizur Rahman, another distinguished fellow of the CPD.

“More than half of the stimulus packages had no mention of employment generation and protection in their aims or objectives,” said Towfiqul Islam Khan, a senior research fellow of the CPD, while making a presentation.

Only one out of nine packages had guidelines for pay-roll protection of the workers, he said.

The implementation of the stimulus packages dedicated to SMEs, farmers and small traders has been low. On the contrary, the disbursement from the package for the large industries and the service sector was faster.

The number of unemployed people had risen by 10 times to 22.23 per cent in July from 2.3 per cent in March. It came down to 4 per cent in September as people started to take part in economic activities, according to a survey of state-run Bangladesh Bureau of Statistics.

About 76 per cent of the cottage, micro, small and medium enterprises, which employ 20.3 million Bangladeshis, were not aware of the packages, the International Finance Corporation said in a survey last month. A whopping 37 per cent of employees in the MSMEs lost their jobs, either temporarily or permanently.

The central bank unveiled a stimulus package of Tk 40,000 crore for the large industrial and service sector. More than 70.8 per cent of the fund was disbursed as of October 30.

“The reluctance of lenders to promote the packages and their cautious stance due to the fragile health of the SMEs have created roadblocks,” Khan said.

The amount of the stimulus packages in Bangladesh was much lower compared to most other countries in the region, the CPD said.

The relative inexperience of lenders and process complexities may have led to lower disbursement of the Tk 5,000 crore stimulus package for the agriculture sector.

As of October 29, around 45.1 per cent of the stimulus package worth Tk 5,000 crore for the farm sector was distributed.

“A good number of garment workers have got back their jobs in recent times,” said Nazneen Ahmed, a senior research fellow of the Bangladesh Institute of Development Studies.

But the workers, aged over 40, are being refused by the previous employers, she said.

“A tendency is being seen that factory owners are producing goods by hiring a smaller number of workers than the pre-Covid period. This has put tremendous physical stress on the workers. We should explore ways to help the aged workers,” she said.

The informal sector workers have faced crisis the most than the formal ones, said Razequzzaman Ratan, president of the Socialist Labour Front.

The informal sector contributes 50 per cent to the economy but there has been no significant financial package for the people who work informally, he said.

“The country’s dependency on the external sector will diminish if we can strengthen the informal sector. The government will have to explore ways to provide jobs to informal sector workers.”

Demand has collapsed at an alarming rate due to the business slowdown, said Kamran T Rahman, president of the Bangladesh Employers’ Federation.

Although the government declared the stimulus packages on time, many enterprises have failed to secure the support due to complex procedures, he said.

“The country witnessed repeated floods along with the pandemic, which created a challenge to speed up the recovery process of the economy,” said KM Abdus Salam, secretary of the ministry of labour and employment.

Sirajul Islam, an NGO activist from Sunamganj, said people in the haor areas did not receive funds from microfinance institutions.

“Banks hardly set up branches in the haor areas. So, reputed NGOs should come forward to give out loans,” he said.