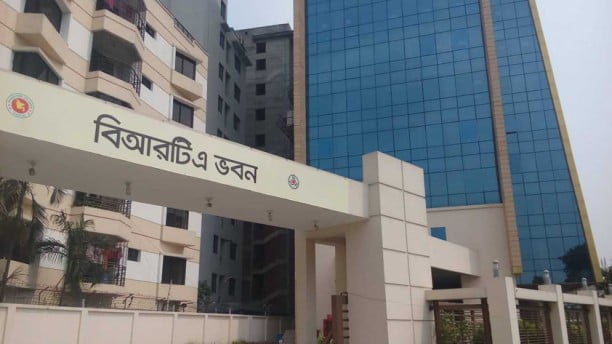 To get a driving licence from the Bangladesh Road Transport Authority, an aspiring driver is supposed to pass three tests — written, practical and viva.

There are 68 driving competency boards to take the tests.

But none of the BRTA offices across the country has permanent, dedicated structures to arrange the tests. Instead, to complete these procedures they have been hiring venues or using classrooms and playgrounds of educational institutions.

The scenario is the same for fitness tests of vehicles. Tens of thousands of vehicles have to take the annual fitness clearance but only a handful issue it.

Only 109 motor vehicle inspectors gave fitness clearances to 7.5 lakh vehicles in the last fiscal year. They gave the vital clearance mostly manually as BRTA has only one digital machine to carry out vehicle fitness tests.

Established in 1987, BRTA deals with a myriad of tasks — from vehicle registrations, issuing and renewing of drivers’ licences, to fitness of vehicles and route permits for commercial vehicles.

But the transport regulator has been facing a severe shortage of professional manpower and the requisite technology to issue driving licences and vehicle fitness clearances — two vital factors for road safety.

Although it has given “refreshment training” to some 75,000 professional drivers in the last fiscal year, experts found the two-day theoretical training — which was reduced to one day due to the Covid-19 pandemic — to be “non-sustainable” and “very inadequate” to ensure safer roads.

Against the backdrop, the country is set to observe National Road Safety Day today. Being observed for the fourth time, this year’s theme is “Mujib Borsher Shapat, Sarak Korbo Nirapad” (Promise of the Mujib Year is to make roads safe).

The main discussion programme will be held at BRTA headquarters. Prime Minister Sheikh Hasina will attend the discussion virtually.

In its annual performance agreement (APA) for the 2020-21 fiscal year, signed with the Road Transport and Highway Division, BRTA said a lack of manpower is its main problem.

The regulatory body performs its functions through 57 district and five metro offices.

It has 708 employees now against a sanctioned post of 823. In January 2013, BRTA made its biggest recruitment in recent times — 149 people, including 50 vehicle inspectors.

The country then had around 18.5 lakh registered vehicles. Nearly eight years later, the number has shot up to around 45.64 lakh but the BRTA could only recruit 19 people during that time and only one was a vehicle inspector.

Now, 109 vehicle inspectors are struggling to deal with checking the fitness of all vehicles in the country. In the last fiscal year, with the help of 86 mechanical assistants, they checked the fitness of 7.5 lakh vehicles.

The inspectors are always under pressure and the quality of inspections is compromised often due to pressure. Moreover, the shortage of vehicle inspectors causes service seekers to wait a long time for fitness certificates.

BRTA has only one Vehicle Inspection Centre (VIC) at its Mirpur office to check some elements digitally and some 100 commercial vehicles (bus and trucks) are tested there every day.

Other vehicles have to be checked manually, which experts said could compromise safety as it leaves room for manipulation and irregularities. An automated system can get exact performance data of a vehicle’s key safety features like headlights, brakes, and speed capabilities, which is almost impossible to do manually, they said.

“All these factors create an atmosphere where service seekers feel discouraged to come to a BRTA office with their vehicles for fitness clearance. Brokers take advantage of that situation,” a BRTA official told this correspondent.

In the APA, BRTA mentioned the establishment of more VICs and their operation as a challenge. It also mentioned the lack of permanent structures, driving tracks, ramps, exam rooms, vehicles for testing aspiring drivers as other challenges.

“We have to hire places and manage classrooms and grounds of educational institutions for free to take these tests,” another BRTA official said.

He said there are 68 driving competency boards, led by an additional district magistrate-level officer, to look after the tests. Due to the huge pressure of licence seekers over the last few years, all four boards in Dhaka (three metro circle offices and another district office) take tests every office day.

“Even after that, licence seekers have to wait for at least six months after submitting an application to take part in a test. Besides, it is not possible for all board members to be present regularly. More boards can solve the problem,” he said, wishing not to be named.

‘WORK AS A REAL REGULATOR’

Noted transport expert Prof Shamsul Hoque said, “I can say without any doubt that it is not possible to ensure road safety without ensuring institutional capacity and proper planning.

“We often talk about road safety, but we don’t do what needs to be done,” he told The Daily Star on Tuesday.

“Without performing these functions properly, meaning without doing the basic work, giving education to drivers and enforcing the law would not yield benefits,” he said.

About the BRTA’s training, he said, “Such training is not sustainable and inadequate. Providing such training while keeping anomalies in the system would not work.”

He emphasised on increasing the institutional capacity of BRTA by recruiting more professional manpower and introducing more technology to ensure quality in the process of issuance of licences, fitness and route permits.

Referring to a government move to outsource fitness clearances, he said the government can encourage the private sector and BRTA can work as a “real regulator”.

WHAT THE AUTHORITIES SAY

BRTA Chairman Nur Mohammad Mazumder said they, through the Road Transport and Highways Division, have sent a proposal of 2,282 posts last year to the public administration ministry and that there will be a meeting over the issue next month.

“We hope our manpower-related problems will be solved once the organogram is approved,” he told The Daily Star on Tuesday.

Asked about the lack of infrastructure, he said works were underway for two separate projects under which a BRTA office/training centre with VIC facilities would be constructed in five major districts.

“We will implement the plan in all districts gradually,” he added.