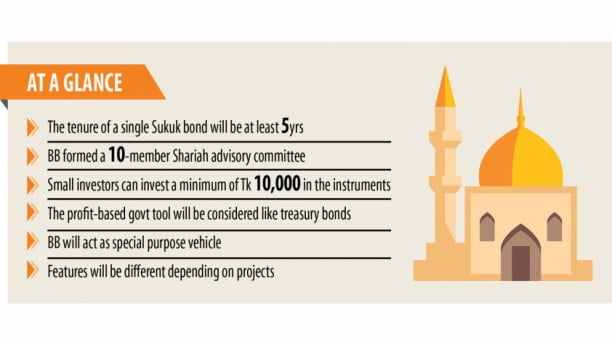 The government plans to issue Shariah-compliant bonds, commonly known as sukuk, from December as part of its effort to implement infrastructure projects smoothly.

The Bangladesh Bank will act as a special purpose vehicle (SPV) for the issuance of the upcoming government securities to materialise the projects.

The tenure of a single sukuk will be at least five years as the earnings from the tools will be dedicated to implementing the long-term projects.

The central bank has formed a Shariah advisory committee led by its Executive Director Syed Tariquzzaman to select the projects.

The finance ministry issued guidelines on October 8 on the investment criteria of sukuk and the central bank yesterday informed banks and non-bank financial institutions about the development.

A sukuk is an Islamic financial certificate, similar to a treasury bond, which complies with Shariah laws.

Since the traditional interest-paying bond structure is not permissible under the Islamic law, the issuer of a sukuk essentially sells a certificate to a group of investors and then uses the proceeds to purchase an asset where the group has a direct partial ownership interest.

Although the government will borrow from individuals and business entities through sukuk, there are many differences between the Islamic bond and the Treasury bond.

For instance, the government now issues six T-bonds with tenures ranging from 2 years to 20 years to finance deficits. It pays interest to clients based on the rate set by auctions from time to time.

But several sukuks can be introduced as each of them will be designed considering the characteristics of a project, said an official of the central bank and a member of the advisory committee.

The tenure of the profit-based instruments will depend on the implementation and operational period of the projects.

Any resident or non-resident person or organisation will be allowed to invest in the Islamic securities and they have to embrace the profit or loss stemming from the projects.

This means investors will not enjoy any interest on their investment in sukuk. They will be permitted to take profit and the ratio will be higher or lower depending on the success of the projects.

The upcoming instruments will attract small investors as they will able to invest as low as Tk 10,000 in the Islamic instruments in contrast to Tk 1 lakh in the T-bills and bonds.

Since both sukuk and T-bills and bonds are considered to be safer investments than equities across the globe, the Islamic securities will get momentum in the quickest possible time, the central banker said.

The government borrows from both banking and non-banking sources by issuing T-bills, bonds and savings certificates to manage deficit financing.

The government’s earnings from sukuk will not be spent to manage the deficit financing as it would be set aside for projects. The investors of the sukuk will avail the partial ownership of the projects as well.

All operational expenditures of projects will be maintained by the central bank as part of its role of the SPV, a subsidiary created by a parent company to isolate financial risk.

Since the issuance of the first modern sukuk in 1996, the cumulative issuance of sukuk has crossed the $1-trillion mark, according to the Islamic Finance Foundation, an initiative based in Manchester, UK aimed at developing the Islamic financial market. At the end of 2018, outstanding sukuks were valued at $469.7 billion across 2,887 sukuk.

The global sukuk market has enjoyed tremendous growth since 2013, according to S&P Global Ratings, an American credit rating agency.

As measured by the Dow Jones Sukuk Total Return Index and the S&P Global High Yield Sukuk Index, the US dollar-denominated sukuk market experienced a compound annualised growth rate of nearly 18 per cent, driven by increased issuance from sovereigns and supranationals, as well as strong investor demand for Shariah-compliant securities.

Historically, the majority of issuance has come from Saudi Arabia and Malaysia. However, the past three years have witnessed an increasing number of issuers from new markets, as well as a deeper and broader investor base, the agency said in February.