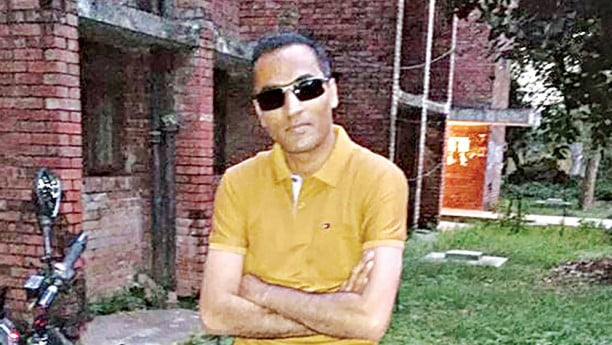 More than a dozen complaints of assault, blackmail and extortion, and verbal abuse of female visitors have been submitted to Jahangirnagar University authorities against its chief security officer Sudipta Shaheen in the four years since he took office.

His activities created a menacing atmosphere on campus among students and staff as well small traders, several of who have been assaulted by him.

However, the university authorities have taken no action against Shaheen so far despite the numerous allegations against him.

After these incidents took place, all they said is, “Investigation is going on.”

The Daily Star obtained copies of most of these complaints against the 45-year-old, who did not even spare university teachers.

Written complaints were submitted to the authorities over two separate incidents — one where Shaheen misbehaved with two teachers of the chemistry department who were with some alumni of the university and another with a former student of the university who runs a shop near JU’s main gate.

Some also verbally complained to the administration against Shaheen; many didn’t even report the incidents out of fear, students said.

Some were brutally beaten, tortured and threatened with dire consequences if they reported what they faced, the victims mentioned in their complaints.

The latest victim is a van-driver named Nahid Hossain, who had his leg broken after Shaheen allegedly beat him up with a stick for hours for bringing his van inside the campus.

Nahid said Shaheen detained him from the Chowrangi area on October 16 and took him to JU’s security control room.

“Hurling abuse, he [Shaheen] first slapped me in the ear with all his force. Then he repeatedly kicked me… I fell to the ground while a security guard named Uzzal was holding me there,” Nahid told The Daily Star on October 20.

“Stuck in the control room for three hours, Shaheen beat me mercilessly with a stick. When I was screaming, he warned that he would continue to beat me forcing a towel in my mouth,”

Nahid said he was released on the condition that he would keep his mouth shut, or else Shaheen would hand him over to the police framing him as a drug peddler.

Nahid, who used to run a mobile tea stall on campus before it closed down due to coronavirus, asked in tears, “How will I earn now with this broken leg?”

Shaheen, however, denied these allegations, saying he has been just doing his “duties”.

On December 10, 2018, Mohammad Shamim, 27, who had come to the campus with his girlfriend, was taken by Shaheen to his office.

There, Shamim said, he was beaten up for hours with a pipe and sticks and then Shaheen pushed marijuana and cartridges into his pocket. Shaheen then threatened that he would destroy his life by calling the police and journalists if he reported this.

Another incident, which took place on February 15 last year, involved a female news presenter of a private television channel who was verbally abused by Shaheen for being on campus.

Contacted, JU acting registrar Rahima Kaneez said, “A probe is ongoing regarding all the complaints. Steps will be taken after getting the report.”

Rahima Kaneez had said almost exactly the same thing last year when this correspondent asked her for comment about an earlier incident involving Shaheen.

She this time said, “The probe body is looking into all the allegations. It was delayed due to the coronavirus lockdown.”

Asked how many allegations are there against Shaheen, Rahima Kaneez said she couldn’t remember.

JU Pro-VC (academic) Prof Nurul Alam, who heads the probe body looking into these allegations, said, “The investigation against Shaheen has been completed. All that remains is to forward the complaints to the relevant officer. We are going to submit the report very quickly.”

The delay, he said, was due to the body having no available typist to write this up.

Earlier, another committee had been formed by the university administration to investigate a complaint against Shaheen.

Wishing not to be named, a committee member said, “We recommended higher punishment of the accused last year. But, the authorities didn’t place it at the syndicate meeting yet.

“Due to lack of accountability and punishment, this officer is committing crimes day after day.”

Contacted, Sudipta Shaheen denied beating up Nahid or any other outsiders, like visitors and van-rickshaw pullers, on campus.

“Since I took over the post of university security in-charge, I have shut down several drug-taking spots and some places where indecent activities would take place so I have been an eyesore to many. I just pursued the directives and rules of the university,” he added.