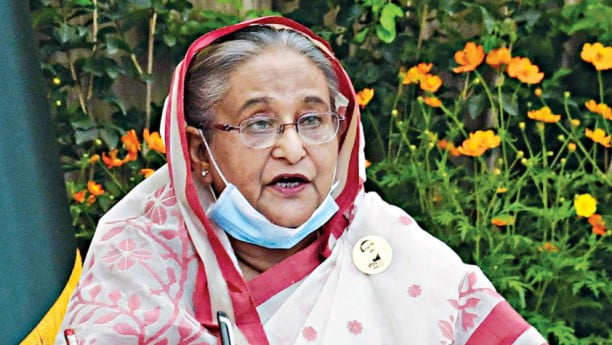 Prime Minister Sheikh Hasina yesterday asked the authorities concerned to bring drivers under a dope testing system to know whether they abuse drugs.

“We need to know whether those who are driving [vehicles] use drugs. They need to undergo dope testing. This testing is absolutely essential for each drivers. You have to do this,” she said while addressing a discussion through a video conference from the Gono Bhaban.

The road transport and bridges ministry organised the event at the auditorium of Bangladesh Road Transport Authority on the occasion of the National Road Safety Day 2020.

Hasina asked people not to take law into their own hands. She urged people to give up their mentality of assaulting drivers and attacking vehicles over an accident as it invites further accidents in many cases.

She suggested that pedestrians should use zebra crossings. “Everyone must follow traffic rules as those are applicable to all.”

The premier asked drivers to give up the mentality of overtaking on roads and highways as it causes accidents in many cases.

Talking about pedestrians, Hasina said there was a serious lack of awareness over traffic rules. “Some pedestrians cross roads just raising their hands in front of running vehicles without considering that it takes time to stop a vehicle even if the driver applies the brake. People will have to be aware about it.”

Citing more examples of violation of traffic rules, the PM said the most unfortunate thing is that mothers carrying babies cross roads without using footbridges.

Carrying his baby in his arms, a father was seen crossing a road after scaling the central reservation, she added.

The PM advised people to call 999 police helpline to rescue any victim and take him to a hospital as police services are very good now.

Hasina asked those who are carrying out the road safety movement to conduct a massive campaign in this regard.

She stressed the need for providing training to bus drivers’ helpers alongside the drivers, ensuring fitness of vehicles, arranging alternative drivers for long route vehicles and making all aware of traffic rules from their school life.

The premier said the government would construct resting rooms for drivers along all long-distance roads in phases as they need rest.

She said the government has been working to ensure road safety by formulating different plans. The government was improving rural roads so that villagers could enjoy urban facilities staying in villages, she added.

Road Transport and Bridges Minister Obaidul Quader presided over the function, while Home Minister Asaduzzaman Khan was connected to it virtually.