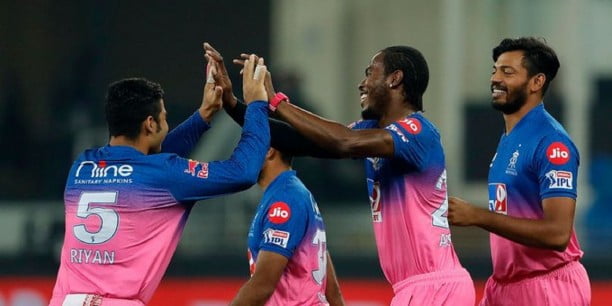 England’s Jofra Archer claimed David Warner’s wicket for the sixth time this year on Thursday but the Australian still came out on top when his Sunrisers Hyderabad beat Rajasthan Royals by eight wickets in the Indian Premier League.

Warner, who lost his wicket four times to Archer in Australia’s summer tour of England and again in the IPL two weeks ago, lasted just four balls this time against the fiery fast bowler.

He managed to hit one four in the opening over before being brilliantly caught by England all-rounder Ben Stokes in the slips off Archer.

“I was frustrated. You try hard to get through the first over, but with someone bowling at 150kph, you can’t do that much,” Warner said smiling after the game.

“You try to hit the ball with the middle of the bat or you send it to third man. In my case I got caught,” he added, acknowledging that Archer is “world class”.

Archer quickly claimed Jonny Bairstow too and Hyderabad seemed in trouble at 16-2 in the third over as they chased Rajasthan’s 154-6.

But Manish Pandey (83) and Vijay Shankar (52) put on an unbeaten 140 for the third wicket to seal an overwhelming eight-wicket win.

Victory put Hyderabad into fifth — two points behind Kolkata Knight Riders — and still with a hope of one of the four playoff places with four games to play.

Rajasthan dropped to seventh with a mathematical chance but Warner’s Australian teammate Steve Smith has only three games to go and knows he needs a miracle turnround now to progress.

Smith won the toss and chose to bat but Rajasthan again failed to fire.

Stokes opened and hit 30 off 32 balls, and wicketkeeper Sanju Samson made 36 off 26 balls.

After the early departure of Warner and Bairstow, Pandey — who hit eight sixes and four fours — and Shankar never gave the Rajasthan bowlers a look in and completed the target with 11 balls to spare.