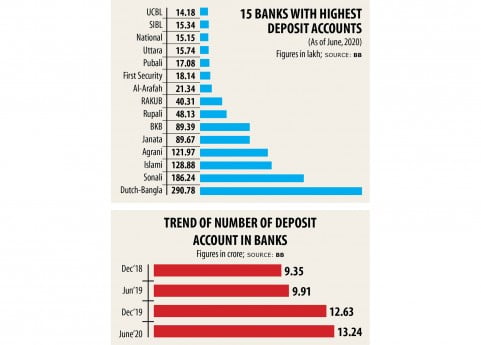 Account ownership is almost universal in high-income economies: nearly all unbanked adults live in the developing world, according to a World Bank report released in April last year.

Nearly half of them live in populous developing countries such as Bangladesh, China, India, Indonesia, Mexico, Nigeria, and Pakistan, said the report titled “Financial Inclusion: Europe and Central Asia Update”.

The unbanked adults are more likely to have lower levels of education than the people with accounts.

In the developing world, about half of all adults have no more than primary school education. Among unbanked adults, the share is close to two-thirds, the report said.

Although there is no clear data on the number of unbanked people in Bangladesh, different researches hint that more than 40 per cent of the population remain out of the formal financial system.

“But there is a ray of hope that both the deposits and the number of accounts have been on the rise in recent years,” said Atiur Rahman, a former Bangladesh Bank governor.

The number of deposit accounts in the banking sector stood at 13.24 crore as of June this year, up 4.60 per cent from six months ago and 33.60 per cent from a year earlier, according to data from the central bank.

“So, the rising trend involving the number of accounts can help curb corruption and bring prosperity,” said the economist, who has garnered praise from the global community thanks to his tremendous efforts to bring unbanked people under the financial umbrella.

Citing a recent survey, he said the number of dormant accounts in the country has reduced to 10 per cent, a sign of the vibrancy of financial activity through the accounts.

Rahman, however, said the huge number of accounts would not have much of an impact on the economy if banks do not give out loans digitally.

Banks should disburse small loans to clients digitally such that deposits can be used properly in the interest of the economy, he said. Banks can lend promptly if they follow the digital means while sanctioning funds.

“Our clients can withdraw funds through our large ATM network. The network has encouraged the opening of accounts with the bank,” he said.

The bank has 2.90 crore accounts, the highest in the banking sector.

Also, Dutch-Bangla Bank encourages depositors to avail branchless banking modes such as ATMs and mobile apps, which have been providing tremendous support to clients, Shirin said.

He, however, said the bank can manage profits only from accounts of businesspeople and jobholders.

As per the central bank rules, banks are allowed to enjoy service charge ranging from Tk 100 to Tk 300 from deposit accounts. But nothing can be charged if the average annual minimum balance is below Tk 10,000.

“Our 70 per cent account-holders usually fail to keep more than Tk 10,000 annually. The majority of them have come from low-income groups,” he said.

Islami Bank Bangladesh has been managing a large number of deposits through its accounts, said Md Mahbub-ul-Alam, managing director of the country’s top private lender.

As of June, the bank held 1.29 crore accounts, the third-highest among all lenders.

“IBBL has been the top remittance recipient for years and the deposit accounts have helped it attract the remitters,” he said.

Banks should take up more initiatives to mobilise funds as this will help strengthen national savings, Mahbub said.

Deposits in the bank now amount to Tk 113,000 crore riding on the accounts.

“The rising number of accounts has helped curb corruption as well,” said a central bank official.

The cash allowance under the social safety net programmes is being disbursed through bank accounts, bringing transparency in the funding process meant for the marginal people, he said.