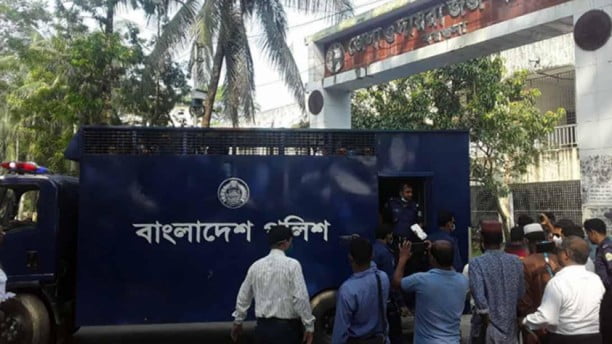 A Barguna court today sentenced six out of the 14 juvenile accused to 10 years’ imprisonment in the much-talked-about Rifat Sharif murder case.

Judge Hafizur Rahman of Barguna Children’s Court started reading out the verdict around 1:15pm, which ended at 2:45pm.

The court, however, acquitted three other juvenile accused — Maruf Mallick (17), Ratul Sikder Joy (16) and Aryan Hossain Shravan (16) — as charges brought against them were not proven.

All the 14 juvenile accused were present before the court, our Patuakhali correspondent reports.

He expressed satisfaction over the judgement and said, “We are happy with the verdict as real culprits have been awarded punishment.”

Through the judgment, rule of law has been established, he added.

Advocate Md Humayun Kabir, lawyer for convict Oliullah Oli said, “We are very unhappy with the judgment as we have been deprived of justice.”

“We will go to the High Court to ensure proper justice and hope we will get justice there.” he added.

Rifat’s father Abdul Halim Dulal Sharif in his reaction said, “I and my family are very happy with the justice. My son’s soul would be in peace now, I believe.”

On January 8, Barguna District and Sessions Judge’s Court framed charges against 14 juvenile accused in the Rifat murder case. Then the testimony started from January 13.

Earlier on September 30, the Barguna District and Sessions Judge’s Court delivered the verdict of 10 adult accused in the Rifat murder case. The verdict ordered the execution of six accused, including Rifat’s wife Ayesha Siddique Minni, and acquitted the other four.

Rifat was hacked in broad daylight in front of Barguna Government College on June 26 last year. He died at Barishal Sher-e-Bangla Medical College Hospital on the same day.