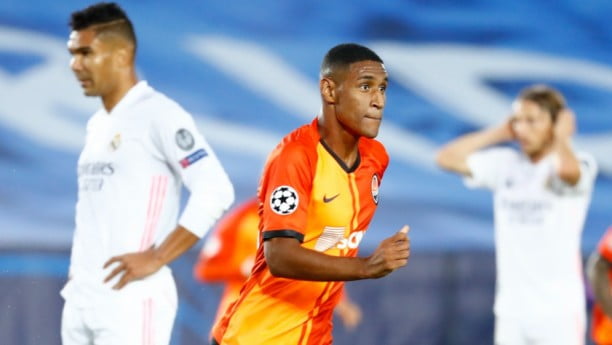 Shakhtar Donetsk pulled off a shock 3-2 win away to 13-times winners Real Madrid in their Champions League Group B opener on Wednesday, despite the Ukrainian side missing 10 players due to injuries and COVID-19.

Brazilian midfielder Tete gave Shakhtar the lead in the 29th minute of a whirlwind first half, slotting low past an outstretched Thibaut Courtois after team mate Viktor Korniyenko had zig-zagged his way through Madrid’s defence.

The visitors doubled their lead four minutes later when Madrid defender Raphael Varane stabbed into his own net as he tried to clear the ball after Courtois had parried a shot, while Israeli forward Manor Solomon continued the onslaught by firing home shortly before halftime.

Luka Modric pulled one back for Zinedine Zidane’s shellshocked side with a brilliant strike from distance early in the second half before substitute Vinicius Jr reduced the deficit to one goal.

Federico Valverde thought he had equalised in added time with a heavily deflected shot but the goal was ruled out for offside as Vinicius was blocking the vision of goalkeeper Anatoly Trubin and the depleted visitors celebrated one of their most memorable victories in European competition.