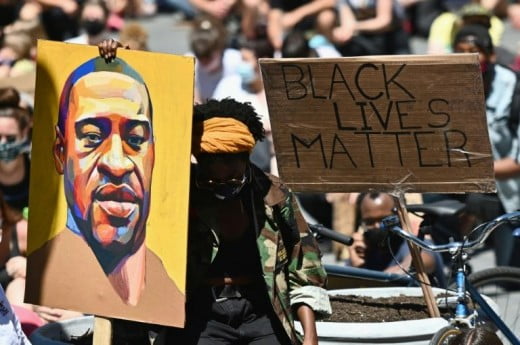 US police officers shoot three times as many unarmed Black people as unarmed white people relative to their population size, according to a study published Wednesday on what researchers termed a “public health emergency”.

The findings come as the US has seen waves of protest since the killing of George Floyd in May, which became a symbol of what many say is systemic racism and abuse of African Americans by police.

A lack of official data had prevented accurate estimates about the extent of the problem.

Researchers from the University of Pennsylvania, Yale and Drexel University College of Medicine, drew on publicly available data compiled by The Washington Post on people killed by on-duty police officers in the US between 2015 and 2020 to map trends in these incidents.

The study, published in the Journal of Epidemiology and Community Health, found that the rate of incidents had remained largely unchanged in the last five years.

There were 5,367 fatal police shootings reported during the period, according to the data, which the study said was sourced from local news reports, independent databases, and additional reporting at the paper.

Of the 4,653 deaths that had sufficient information to be analysed, the authors found that 51 percent of the fatalities were white, 27 percent were Black, 19 percent were listed as Hispanic, while Native American and Asian people each accounted for 2 percent.

Given the makeup of the US population, the researchers calculated that Native Americans were three times more likely to be shot dead than white people, while Black people were more than 2.5 times, and Hispanic people 29 percent more likely.

“Fatal police shootings are a public health emergency that contribute to poor health” for Black, Indigenous and People of Colour, the authors said.

Researchers said they included people with objects — for example an air conditioner, a chair, pen or shovel — in the list of those who were unarmed because “of the low likelihood of immediate lethal force”.

Among this unarmed group — and also relative to population size — Black people were 3.18 times more likely to be fatally shot than white people, while the rate was 1.45 times higher for Hispanic people.

Researchers acknowledged the limitations to the study, including that the original data relied on news reports and could therefore have missed incidents that did not attract media attention.

They added that it also does not capture other types of serious injury and death in police custody, including the death of George Floyd.

A police officer was filmed pressing his knee to handcuffed Floyd’s neck until he went limp during an arrest in May.

The officer, Derek Chauvin, is charged with second and third-degree murder and manslaughter.

The killing sparked weeks of protests around the country, with the shootings and deaths of other African Americans — including Breonna Taylor in Louisville, Kentucky — contributing to the claim that Black people are disproportionately victims of police shootings when compared to other races.

A study published last year in the Proceedings of the National Academy of Sciences found that Black men in the US were 2.5 times more likely to be killed by the police than their white counterparts.

Researchers used data from Fatal Encounters, a journalist-led effort, as well as the National Vital Statistics System, to analyze the period 2013-2018.