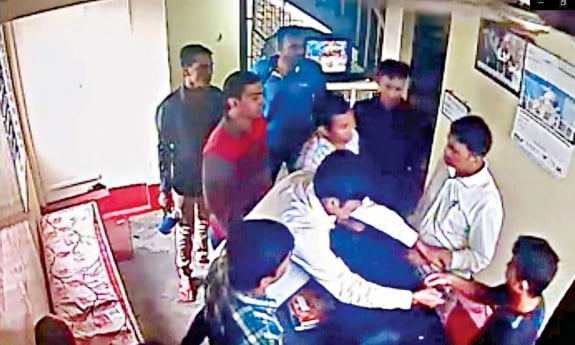 A Dhaka court yesterday fixed November 24 for the next hearing in the fake currency case filed against Hotel Bondhu manager Hasan Majumdar and its chef Sohel Rana as two witnesses failed to show up.

The case was filed following a controversial raid conducted by Detective Branch of police in 2016.

Judge Tehsin Iftekhar of the Metropolitan Special Tribunal-15 of Dhaka passed the order after the prosecution filed a petition.

Ten prosecution witnesses out of 13 have so far testified, court sources said.

In the petition, the prosecution said the two witnesses failed to appear before the court for unknown reasons. So, the hearing should not be held.

During a raid at the Hotel Bondhu in the capital’s Paltan on November 6, 2016, a team of plainclothes officials from the Detective Branch of police detained hotel manager Hasan Majumdar and chef Sohel Rana. The CCTV camera of Hotel Bondhu captured it all.

But the first information report prepared by the police a day after the incident, on November 7, gives a completely different story, contradicting the video clips and multiple witness accounts.

According to the FIR lodged with Motijheel Police Station, officers arrested Hasan and Sohel from an alley near Fakirapool Fish Market area around 4:15pm. The two were held while fleeing the spot with Tk 25 lakh worth of fake notes, it mentioned.

Hasan alleged that the FIR and subsequent case had been cooked up by the DB.

Sub-Inspector Dewan Uzzal Hossain of Motijheel Police Station pressed charges against the duo on September 19, 2017. On October 29 that year, the charges were framed against them.

Following the incident, Hasan and his brother Hossain Majumdar lodged 10 complaints — six with the Police Headquarters, two with Dhaka Metropolitan Police, one with the Prime Minister’s Office, and one with the home ministry — on different dates over the last four years.

Multiple probe committees were formed by the Police Headquarters and the Dhaka Metropolitan Police to investigate the allegations against nine DB men of Motijheel Zonal Team who conducted the controversial drive.