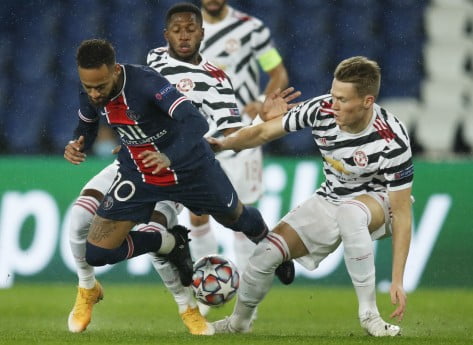 Paris St Germain’s Thomas Tuchel said his side lacked intensity as they started their Champions League campaign with a 2-1 home defeat by Manchester United on Tuesday, the club’s first loss at the Parc des Princes in the group stage in 16 years.

PSG struggled throughout and fell victim to a late goal by Marcus Rashford, who had already eliminated them with a last-gap penalty in the last 16 in the 2018-19 Champions League.

“It was not possible for us to win today. I don’t know why we lacked rhythm and intensity, it was surprising,” said Tuchel, who was without captain Marquinhos after the centre back failed to recover from a groin injury picked up on duty with Brazil.

“In the first half we were not strong enough, we did not play together enough. Then we were better after the break but it was hard not to do better considering how we played in the first half,” added Tuchel.

PSG left United too much space and it resulted in Rashford netting the winner with a precise low cross-shot into the corner of the net after being allowed to canter through the midfield.

“The game was too open, we failed to control it,” Tuchel explained, adding that his makeshift midfield, with Danilo Pereira replacing the injured Marco Verratti, lacked collective experience.

“We created this midfield who were playing for the first time together, it was not easy,” he added.

But PSG were also deficient up front, with Neymar, Kylian Mbappe and Angel Di Maria unable to threaten, two months after the French champions reached the competition’s final.

“We did not play at our level in defence or in attack,” said Tuchel, who is hoping the display was a “one-time thing”.

“Now is not the time to be angry or lose our cool. We just have to be honest with ourselves and question our performance. Today was a tough start.”