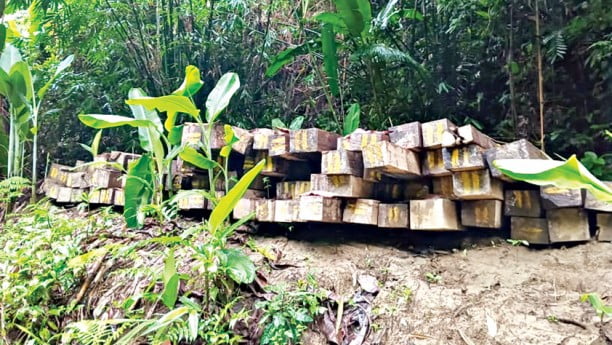 In a statement issued on Sunday, the platform said some timber smugglers were destroying the Sangu reserve forest in connivance with some unscrupulous officials of the forest department.

The smugglers have been using more than 1,000 loggers since mid-September to destroy the natural forest, it alleged.

The organisataion demanded immediate removal of loggers tasked with felling trees from the Sangu forest, departmental action against dishonest officials of the forest department, stopping transportation of timber at Boro Madok, Choto Madok, Remakri and Tindu areas adjacent to the Sangu protected forest and formation of a high level multi-sectoral committee to probe the incident.

Declared protected in 1880, the Sangu reserve forest is known as the only virgin forest in the country. There are 36 species of mammals, 48 species of reptiles, 19 species of amphibians, and 11 species of rare birds, the statement said.

The Sangu-Matamuhuri Sanctuary was created in 2010 with parts of the Sangu and Matamuhuri forests to protect endangered wildlife in Bangladesh.

The organisation said smuggling of timber from the reserve forest is a matter of serious concern as one has to cross 12-14 check posts of the forest department, police and other law enforcement agencies to reach Thanchi from the forest.

It said destruction of these forests would have a serious impact on the flow of the Sangu and the river might dry up. Besides, there would be multidimensional environmental disaster in this region.

Contacted, Assistant Conservator of Forest in Bandarban Md Anwar Hossain denied the allegation that officials were involved in smuggling of timber. “We have some limitations for travelling to the Sangu reserve forest as it is located in a very remote area,” he added.