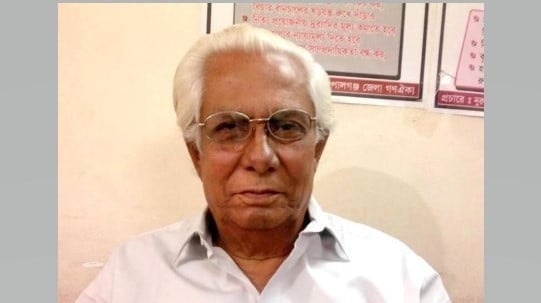 Pankaj Bhattacharya is one of the few left-wing ideological politicians in Bangladesh. He spent almost his entire life holding on to his ideologies, never making any compromises. This veteran politician is the president of Oikya NAP.

Pankaj, who has seen many ups and downs, movements and struggles in his long political career, talked with The Daily Star recently. The 81-year-old politician touched upon a whole range of issues like the spirit of the liberation war, current position of the political parties including the party in power and quality of pre- and post-71 elections.

The Daily Star (DS): We would like to understand the current political situation from your perspective.

Pankaj Bhattacharya: The politics of welfare for people, to improve the condition of their life and to create a society free from exploitation, has suddenly disappeared.

DS: What do you mean by ‘suddenly disappeared’?

Pankaj Bhattacharya: It started after August 15, 1975. The anti-liberation and anti-independent forces that did not accept the creation of Bangladesh carried out the brutal massacre on 15 August. After that our journey was (backwards) towards a communal state. But that journey has changed direction and (people) have fought for that change. In that process, Awami League has been in power three times. They have been in power for a long time.

But why would the changes made in 1975 still be relevant? This is what I mean by ‘sudden’. It was not supposed to be. Bangabandhu’s Bangladesh, the independent Bangladesh, is non-communal and humane. Why is that Bangladesh stumbling again and again?

My concern is the people-oriented politics that we were doing suddenly went off track. I have seen elections during the Pakistan period, still watching elections now. The current election was one without the involvement of the people.

If someone jokes that it is a state election, it is very difficult to refute that with logic. I wonder why the country will run in the style of non-people democracy. It is here where we have strayed from the path of Bangabandhu.

DS: Is the idea of ‘development or democracy’ an inner essence of that deviated path?

Pankaj Bhattacharya: Development and democracy are two sides of the same coin. They are not contradictory. Development without democracy is temporary; the foundation is weak. Bangabandhu’s motto was the constitution will be the guiding principle for the executive branch, the judiciary and the parliament which run the country. But we are not walking that path now.

DS: Voter-less election applies to military dictatorships as they do not have a public base. But the Awami League is a party that has a mass base. They are the biggest political party. So, what is the logic to consider them isolated from the people?

Pankaj Bhattacharya: It is unfortunate that a truly opposition political party with the spirit of the liberation war has disappeared. The BNP is largely responsible for that. It is still a big question whether the Jamaat-loyal BNP can fulfill that responsibility. If they do not resolve this, it is difficult to say whether BNP will exist in the future.

DS: Do you expect BNP to live up to its due role as an opposition political party?

Pankaj Bhattacharya: It is the demand of time. But The BNP has been engaged in a conspiracy. When they came to power, they noticed some changes and tried to do something. Regardless, accepting the (facts) of the liberation or talking about it, they have spoken about the spirit of the liberation war. They also showed the potential for change. They say that they have got pro-liberation forces in the party. The question is then why they will not change? Why they will be (associated) with Jamaat? And Awami League is tactically cashing in on that failure.

DS: That means Awami League is using that weakness as an opportunity. Do you want to say that where Bangladesh’s politics will be heading depends on BNP?

Pankaj Bhattacharya: BNP gets 35 percent votes. It’s not a joke. With the support of those people, if the BNP had taken the path for change and moved towards the spirit of the liberation war it would have been easier for them. However, the Awami League is using this as an opportunity.

Pankaj Bhattacharya: The big question is whether that election was held or not. That is why I was saying, I saw the election in 1970. I am still watching the current ones. I have not seen such spineless and obedient Election Commission like the current one any time before, not even in 1970.

DS: Why did the Pakistan military administrators allow an impartial election in 1970? Why did they allow the people to vote? Did they really want a fair election, or it was a miscalculation on their part?

Pankaj Bhattacharya: They did not expect that. They thought the right-wing communal parties in East Pakistan will get a good number of votes to strengthen their hold here. But the people foiled it.

DS: You are talking about BNP. But there was a time when people thought the leftist parties will emerge as a third political force in the country. Why have they failed?

Pankaj Bhattacharya: They are the only ones to be blamed for that. They must find out why they failed to get the masses onboard. They will be successful only when they are able bring the non-communal forces closer and create alternatives in the spirit of the liberation war. Otherwise, I do not see any possibility of success.

DS: Do you see that possibility?

Pankaj Bhattacharya: I still think they have the potential to turn it around. After the collapse of the Soviet Union, socialism failed, but the idea of social system without exploitation has not. So, in an effort to create a society free from exploitation, if they can find a suitable way, then they can become an alternative ideological force.

DS: Why do you think Awami League has been isolated from the people?

Pankaj Bhattacharya: The Awami League is working much like a military government. The grassroots power of the Awami League is not being utilised. They are running the country with the support of the administration.

DS: Awami League has repealed the indemnity act and tried the killers of Bangabandhu. The party has also tried and punished war criminals.

Pankaj Bhattacharya: These are definitely major successes. The trial of the killers of Bangabandhu was barred by the indemnity act. To repeal the act and then bring the killers to justice was a historic event for the nation. They are failing to keep up the good work because bureaucracy is now controlling politics. The political exercise based on people’s desire and fined tuned through debate in the parliament involving the ruling party and the opposition is currently absent.

DS: It is said that a kind of culture of fear without good governance has been created in Bangladesh for the last few years. What are your thoughts on this?

Pankaj Bhattacharya: It is partly true that such a situation has been created to some extent. If Awami League moves away from a system that accommodates street protests, heated debates in the parliament, accountability of the government and its executive branch and if the trend of government-controlled politics continues, then I’m really scared about the future of the party, which was built and grew on the support of the masses.

At the Awami League conference in 1974 Bangabandhu had said, “Now we have to have self-analyse…we have to purify ourselves and carry out cleansing operations from head to toe.”

Incidents of extortion, encroachment, rape and torture are taking place. And in that context, the trend of Rashed, Samrat, Papia, Paplu, Porimals is not sudden. They have got a fertile land in Awami League. That needs to be cleansed. The weeds have to be uprooted. A few judicial initiatives will not solve it. It requires a constant effort. Since the opposition is ineffective, the Awami League needs concerted effort in its cleansing campaign.

DS: Awami League is saying that the country is moving forward, development is going on, the financial condition is improving and they are equipped to counter any challenge.

Pankaj Bhattacharya: It is a fact that considering the condition 20 years ago, our economy has grown and many development activities have taken place. But if we want a sustainable development, cohesion between the three pillars of the state, we need accountability. It is only then the benefit of the development can reach the grassroots. For example, look at the situation after the coronavirus outbreak. It was not created by any political party; it was a global event. Every country is facing it. The pandemic has hurt some of our development. Around 1.5 crore poor have been created due to the pandemic. The ultra-poor has risen from 20 to a bigger percentage. Around 30-33% people have lost their jobs, and many have left Dhaka to their villages.

DS: The government is trying to overcome the crisis.

Pankaj Bhattacharya: I don’t want to blame the government alone for the coronavirus situation. It is a collective responsibility that involves all organs and each one needs to play its due role. The pandemic exposed the brittle nature of the health sector.

DS: But the Awami League leaders, including it general secretary, are repeatedly saying that our health system is of international standard.

Pankaj Bhattacharya: The health system is so well that our president, ministers, members of parliament and affluent persons need to go outside the country for treatment. It is very unfortunate. We need to think from a neutral perspective. To address the problem does not mean criticising the Awami League. Not only that, our education system might collapse in the future, and the symptoms are there. It is a national crisis. It is not wise to say everything is all right. It is about time we do something.