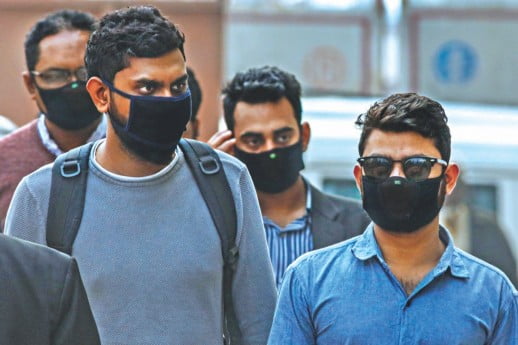 The government has asked public and private organisations not to provide services to people without a face covering as it aims to curb a possible second wave of Covid-19.

A “no mask, no service” policy will be implemented and all organisations will be monitored because the government made masks mandatory in all institutions, markets, schools, and social and religious gatherings.

The directives came yesterday during a virtual cabinet meeting chaired by Prime Minister Sheikh Hasina. The PM joined the meeting from the Gono Bhaban and the cabinet members from secretariat.

“No one will be allowed to enter government offices without a mask. There will be large cautionary posters at the entrance of offices,” Cabinet Secretary Khandker Anwarul Islam told journalists after the meeting.

“We’ve given the instructions… to all levels including social, organisations and formal institutions,” he said.

The instructions came amid repeated calls from the PM to always wear face masks outdoors. She also stressed this at the last cabinet meeting on October 19.

Yesterday, she asked the authorities concerned to be prepared to tackle the possible second wave of Covid-19 this winter.

The National Technical Advisory Committee (NTAC), formed to advise the government on its coronavirus response, urged the government to prepare a roadmap and take all-out preparations for the second wave.

Notwithstanding this, there is a growing unwillingness among the people to wear face masks as the number of people infected with the deadly virus inches towards 4 lakh. The reported Covid-19 deaths reached 5,803 yesterday.

Countries across Europe are seeing a resurgence in Covid-19 cases after successfully slowing outbreaks earlier this year.

Most of the European countries are reporting more new cases each day now than they were during the first wave earlier this year, according to global news agencies.

A second wave, in the context of a viral pandemic, does not have a formal scientific definition or a distinctly defined stage. It is generally considered as a stage when an outbreak appears to recede almost entirely before returning again. In order to say that one wave has ended, the virus has to be brought under control and cases have to fall substantially.

“Refusal to wear masks is unacceptable. Masks must be used in all institutions, haats, markets, shopping malls, schools, and social and religious gatherings. We have made it mandatory,” the cabinet secretary said.

Anwarul said the Islamic Foundation has been instructed to ask the imams of mosques to spread the message after prayers at least twice a day.

The issue of face masks was discussed when the health ministry informed the cabinet about the steps it had taken during the pandemic.

When his attention was drawn to packed mass transports, he said, “We agree. Let’s observe the scenario of the second wave and then we’ll set our next course of action.”

The cabinet secretary said he will sit with secretaries of roads and highways, shipping and railways in a couple of days to discuss the matter.

“Previously, we observed a lack in implementation [of the directives]. This announcement is very much appropriate and the implementation must be ensured.”

About the vaccine for Covid-19, the cabinet secretary said the government has taken the steps necessary to get the shots.

“There are government and private initiatives. We hope to get the vaccine at the first stage,” he said.

Twenty-three people have died from Covid-19 in the country in the 24 hours preceding 8:00am yesterday, according to a press release issued by the Directorate General of Health Services (DGHS).

With this, the total number of deaths rose to 5,803, which is 1.46 percent of all confirmed cases.

Besides, 1,308 people tested positive for the coronavirus, raising the total number of people infected to 3,98,815.

With this, Bangladesh is now the country with the 18th highest number of confirmed cases, according to the worldometers.info.

One each was from Rangpur, Khulna, Rajshahi and Chattogram divisions while 19 were from Dhaka.

So far, Dhaka division accounted for 51.61 percent of all the deaths due to Covid-19.

Yesterday, the cabinet also gave the final approval to the draft of the Women and Children Repression Prevention (Amendment) Bill, 2020, to enact a law in parliament repealing a recent ordinance promulgated to allow death penalty alongside life term imprisonment as punishment for rape.

However, the measures that have been taken under the ordinance will remain valid.

The Women and Children Repression Prevention (Amendment) Ordinance, 2020, was promulgated as parliament was not in session at that time, Khandker Anwarul Islam.

It was supposed to be held on March 22 but got postponed due to the pandemic.

Anwarul said the cabinet also discussed the progress of construction of the Padma bridge.

The 34th span has already been installed. Seven more spans are ready and will be set up by January, he added.