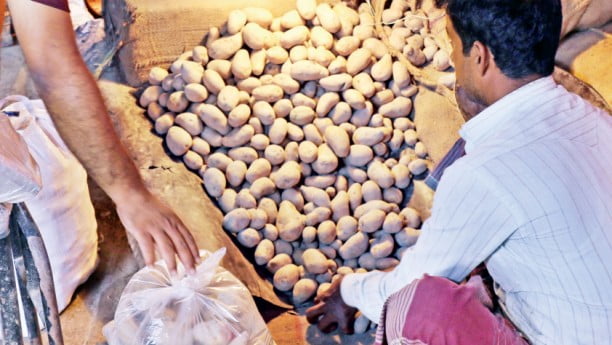 Many stores in the capital have stopped selling potatoes over the last few days after the authorities fixed the prices and began to penalise overcharging sellers.

The cynical manipulation of the market has resulted in runaway prices of potatoes in the market.

In the weeks following monsoon every year, vegetables become costlier, forcing people to add more potatoes to their diet, said Afzal Hossain, a resident of Moghbazar.

“But this year, potato prices are also rising,” he said.

Lutfun Nahar, a house staff member, came to the kitchen market in Karwan Bazar yesterday to buy potatoes at a cheaper rate. But the effort went in vain.

“In my area, potatoes are being sold at Tk 50. But each kg is sold for Tk 48 here. I don’t know how we will be able to live amid such high prices of food,” she said, adding that the income of her husband, a rickshaw puller, has dipped, making matters worse.

Wholesalers at kitchen markets in Mirpur-1 and Mohammadpur say they have stopped selling potatoes from October 31.

In Karwan Bazar, Jatrabari and Shyambazar, potatoes are being sold at a handful of stores.

At Kalyanpur Notun Bazar, Mohakhali, Mirpur and Tejgaon on Tuesday, the correspondent found many stores selling different vegetables except potatoes.

Hasan, owner of Hasan Store at Kalyanpur Notun Bazar, told the correspondent on Tuesday night that he had not been selling potatoes since Sunday because there was no supply at the wholesale market in Mirpur-1. Sourcing goods from any other market would raise the transportation cost, he said.

“After adding the transportation and other costs, the price would be between Tk 55 and Tk 60 a kg. That’s why I stopped selling potatoes,” he said.

The crisis began in mid-September and has been getting worse. The Department of Agriculture Marketing (DAM) on October 7 fixed the price of each kg of retail potato at Tk 30 and wholesale at Tk 25. For stockpilers who keep potatoes in cold storage facilities the price was fixed at Tk 23 a kg.

But the price rose to Tk 50 and beyond at retail markets.

The DAM on October 27 fixed the retail prices at Tk 35 a kg following a meeting with cold storage association members and businessmen. The wholesale price was fixed at Tk 30 per kg.

According to the Trading Corporation of Bangladesh (TCB), the retail price of potato was Tk 42-45 yesterday. It was only Tk 23-25 around this time last year.

There are over 100 wholesale shops at the kitchen market in Mirpur-1.

Salesperson Solaiman said he heard the authorities warn storekeepers of six months in jail and Tk 1 lakh in fines for selling potatoes at higher rates.

Some wholesalers in Karwan Bazar said they sell potatoes only at night in fear of being fined.

They suggested the government control the price at cold-storage level.

Some businessmen who hoarded a lot of potatoes last month have made the matter worse.

“But the hoarders stopped selling potatoes once the government fixed the price,” said Muslem.

The Bangladesh Cold Storage Association (BCSA) in a letter last week urged the hoarders to sell the potatoes at prices fixed by the government.

According to BCSA, this year the production of potatoes was 85 lakh tonnes and due to transport and labour crises during the pandemic, only 40 lakh tonnes of potatoes were kept in cold storages.

Of the 40 lakh tonnes, 55 percent was sold out by October. Of the rest, 10 lakh tonne are meant for farmers.