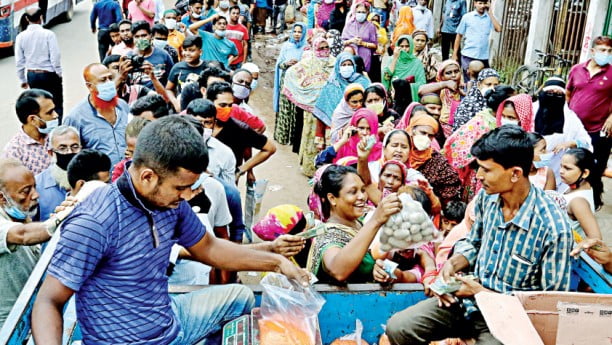 Wholesalers have expressed concerns that the price of potatoes may not come down anytime soon as they are under pressure from a section of hoarders, who recently bought potato stocks at cold storages, to sell the vegetable at a price higher than the government-fixed wholesale rate of Tk 30 a kg.

They also alleged that the hoarders were threatening to stop the supply if they did not follow their directives.

The price of potatoes started rising from the middle of last month. Last week, consumers had to buy the tuber for up to Tk 50 a kg.

According to wholesalers, ownership of potato stocks at cold storages changes up to four times a year. This year, the ownership changed more frequently as a section of businessmen sensed that a crisis was coming.

As the prices of the tuber kept on rising, the businessmen bought potato stocks in cold storages in the last few weeks at higher rates hoping to make a hefty profit.

At a meeting with businessmen and members of the cold storage association, the Department of Agriculture Marketing (DAM) on October 20 fixed potato prices at Tk 35 a kg for retailers, Tk 30 for wholesalers and Tk 27 at cold storage level.

According to the Trading Corporation of Bangladesh (TCB), potatoes were sold for Tk 40 to Tk 45 a kg at different retail markets in the capital yesterday, up from Tk 20 to Tk 25 a kg a year ago.

Md Muslem, owner of Urmi Banijjayalay at the capital’s Shyambazar wholesale market, said hoarders now fear that they may incur a huge loss as the government has already fixed the prices.

He said he sold his total stock at a cold storage about 12 days ago. He, however, did not disclose the amount.

Yesterday, Muslem was wholesaling a stock from another cold storage.

While talking to this correspondent, he received a call from a hoarder in Bogura. The two exchanged heated words over the phone.

“I am selling potato for Tk 30 a kg as per the government’s directives, but he [hoarder] is pressing me to sell it at a higher rate.”

Muslem said hoarders were threatening him of stopping the supply if he did not comply.

Echoing the views of Muslem, another wholesaler Nurul Haq at Shyambazar said he was receiving similar threats.

He said potatoes at cold storages in Munshiganj and Rajshahi were sold for Tk 32 a kg and Tk 33 a kg respectively yesterday.

“If the hoarders can sell potatoes at higher prices there, then why would they send it to Dhaka?” questioned Haq, also the cashier of Potato Wholesalers Association in Shyambazar.

On Wednesday afternoon, the association in a meeting decided to follow the government-fixed rate.

Wholesalers at Shyambazar yesterday sold potatoes at the rate fixed by the government (Tk 30 a kg). However, retailers at the same market were found selling the vegetable for Tk 39 to Tk 40 a kg.

Hanif Mia, owner of New Mohanagar Arot at Shyambazar, said a new potato crop usually starts hitting the markets during this period of the year.

“But the situation is different this year. Farmers are yet to sow seeds in many districts due to prolonged rain. Hoarders know it very well that it will take another two months for growers to harvest the new crop. That’s why they have slowed the supply of potatoes to markets,” he said.

Wholesalers have urged the government to strengthen its monitoring of potato supplies from cold storages to cool down potato prices.

Talking to The Daily Star, Mozammel Hoque Choudhury, secretary of Bangladesh Cold Storage Association, said a section of businessmen slowed the supply of potatoes from cold storages to make an extra profit.

In a letter issued on Wednesday, the association asked the cold storage owners and stockists to take steps to ensure smooth supply of potatoes and cooperate with the government officials and agencies concerned in this regard.

About 393 private cold storages are operating in the country and around half have potato stocks, according to the association.