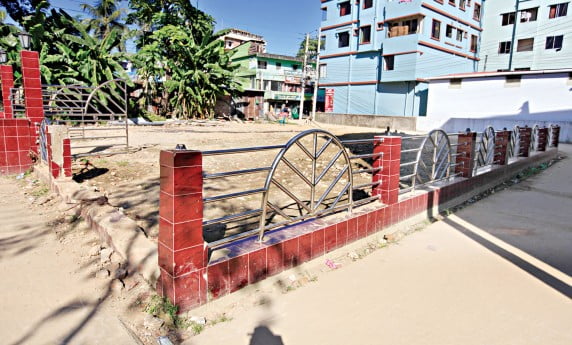 Sylhet City Corporation (SCC) recently filled a pond in the city’s Raynagar area, which was renovated spending lakhs in 2018. The authorities claimed that they did so to prioritise locals’ demand and undo a mistake made by the contractor. But environmentalists said no matter what the reasons may be, they violated law and wasted a huge sum of public money.

Renovation of the pond, owned by Sonarpara Mosque, was planned with a budget of around Tk 70 lakh, according to SCC.

Construction of guard-wall and railing started in February, 2018, which costed Tk 40 lakh, and Tk 30 lakh was budgeted for excavation.

While excavating, the contractor made a mistake by digging too deep, which eventually wrecked parts of the guard-wall along the adjacent road, and damaged nearby buildings.

SCC Chief Engineer Nur Azizur Rahman said, “As it was the contractor’s fault, and the mosque authorities decided to build a market there, we ordered the contractor to fill the pond.”

“We understand that Tk 40 lakh got wasted. However, the excavation charge of Tk 30 lakh will not be paid to the contractor. We had to take the decision considering all grounds,” he said.

Although the city authorities claimed that the mosque committee and locals asked the corporation to fill the pond, they denied it, saying it was decided by SCC.

They also pointed to faulty low-grade renovation work by the previous councillor, Dinar Khan Hasu, who allegedly grabbed the tender from the original contractor.

This correspondent could not contact Dinar, as he now lives abroad.

According to Section-6 (E) of Bangladesh Environment Conservation Act 1995 (amended in 2010), no public or private pond can be filled without permission of Department of Environment (DoE).

But DoE in Sylhet confirmed that SCC did not take any permission from them.

Abdul Karim Kim, general secretary of Bangladesh Paribesh Andolon, Sylhet chapter, said, “Not only did they violate environmental laws, but also wasted public money in the name of development.”

“They filled the pond to cover up their misdeeds. Legal steps should be taken against the city corporation,” he said.

Emran Ahmed, director of DoE in Sylhet, said, “I just came to know that they filled a pond, which is prohibited by law. I’ll look into the matter and will take legal steps.”