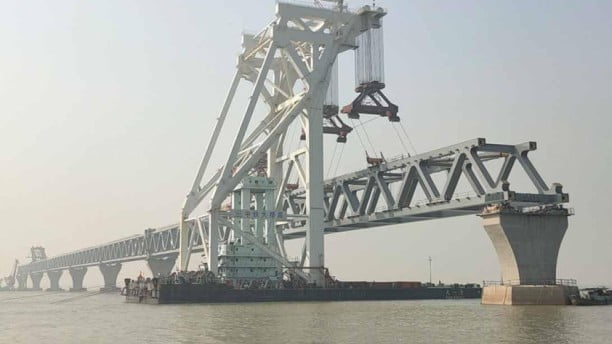 The 36th span of the Padma bridge was installed yesterday, making a 5.4km stretch of the main structure visible.

“After installation of the 36th span around 9:42am, we are hopeful that the remaining five spans are likely to be set up by December 10 and through this, the construction of 6.15 kilometres long bridge will be completed,” said Dewan M Abdul Kader, executive engineer of the Padma Multipurpose Bridge.

The 40th span will be set up on December 2 and the last one on December 10, added the official.

Meanwhile, the 36th span bearing number “1B” was put on the pillars no 2 and 3 at Mawa point.

On Thursday, a specialised floating crane took the span to the designated poles from Mawa’s Kumarbhog Construction Yard, according to the official.

On October 31, the 35th span of the bridge was installed, bringing a total of over 5.2km of the huge structure into view.

The 6.15km long bridge will have 41 spans which would be installed on 42 poles — 21 poles at Mawa point and other 21 poles at Jajira point.

The bridge, whose construction began in December 2014, is expected to be opened in 2021.

The construction of the main bridge is being carried out by China Major Bridge Engineering Company, a Chinese contractor, while Sino Hydro Corporation, another Chinese company, is working on river management.