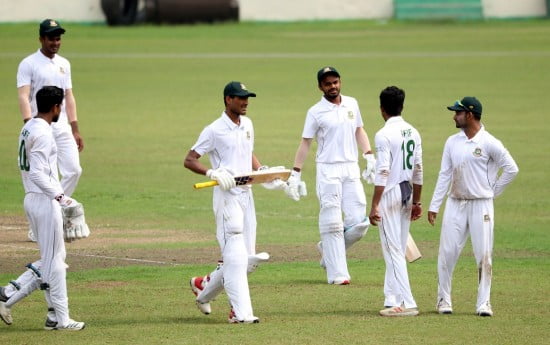 While batsmen shone on the opening day, the fast bowlers took charge on the final day of the intra HP-squad two-dayer at the Sher-e-Bangla National Stadium in Mirpur today.

Playing for Team ‘A’, young pacers Hasan Murad and Sumon Khan took four wickets each to help bundle out Team ‘B’ for 266 in 80 overs.

Sumon, brimming with confidence after his match-winning five-wicket haul in the final of the BCB President’s Cup last month, finished with figures of four for 54 in his 16 overs that featured three maidens. Meanwhile, 19-year-old Hasan scalped four for 35 in 12 overs that involved four maidens.

Opener Naim Sheikh shone the brightest with the bat, scoring a 129-ball 83 featuring 11 boundaries and two maximums. Parvez Hossain, Towhid Hridoy and Mrittun Joy all contributed with their scores of 35, 42 and 58 respectively but a lower middle-order collapse, orchestrated by the pace-duo of Hasan and Sumon, left Team ‘B’ struggling.

Earlier on Day 1, an Akbar Ali century helped Team ‘A’ pile up a massive 406 for seven.