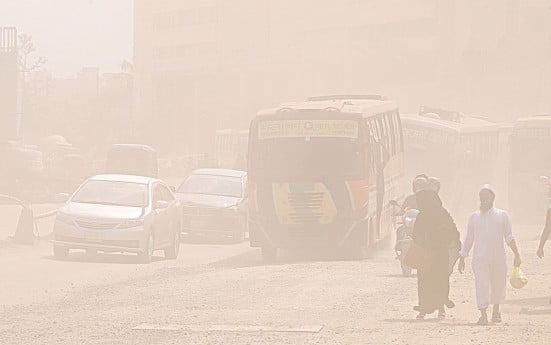 According to a global report from the US-based Health Effects Institute and Institute for Health Metrics and Evaluation that was released yesterday, South Asia is the most polluted region in the world in terms of air. The situation is especially dire in Bangladesh, with air pollution leading to 1,73,500 deaths last year, and with the entire population living in areas where the air quality is not considered safe. The report also mentions that air pollution has become the second leading health risk factor after high blood pressure in Bangladesh, and that our life expectancy would have seen the highest expected gain of nearly 1.3 years if the air pollution level met the WHO guidelines.

Why have we allowed air pollution levels to deteriorate to the extent that over 1.7 lakh Bangladeshis have been killed by it—of which 10,500 were only infants? Experts have opined that the country’s air is becoming increasingly poisonous, with the major pollutants being household solid fuels, dust from construction sites, coal power plants, brick production, transportation and diesel-powered equipment, among others. Despite this, very few concrete steps have been taken to reduce indoor air pollution through cleaner cooking techniques, and to regulate the sectors responsible for outdoor air pollution and replace them with greener initiatives.

In fact, Bangladesh is only further expanding its coal industry with the help of friendly nations, and despite a government decision to phase out brick kilns by 2025 in all construction work and replace them with concrete blocks instead, these kilns are operating across the country. Many of them are doing so illegally, causing great harm to nearby residential areas. According to experts, putting an end to garbage burning will reduce air pollution by around 30 percent, yet this practice also continues unabated. In February this year, the High Court issued a nine-point directive to control air pollution which, among other things, included covering sites where construction work is underway, seizing vehicles that emit black smoke and ensuring the use of covers on trucks or other vehicles that transport sand or soil. Most of these directives have not been implemented so far.

Air pollution is not just an environmental issue; it is a major public health problem and at this stage, the authorities should treat it as an emergency and take immediate steps including passing the draft Bangladesh Clean Air Act and ensuring its implementation. There are no excuses for apathy and delay when it comes to controlling air pollution in Bangladesh, especially during the pandemic when there is clear evidence of the connection between air pollution and increased heart and lung diseases, and of how people with these diseases are more vulnerable to Covid-19.