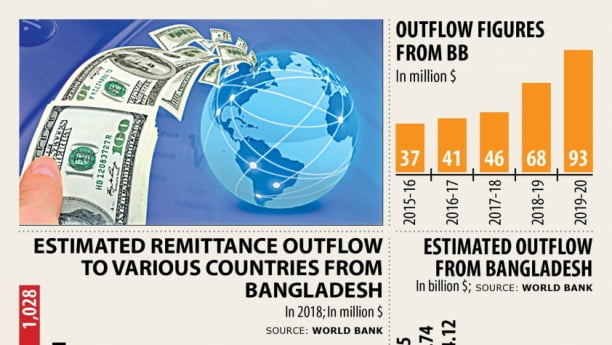 Foreign nationals working legally and illegally in the local, foreign and multinational companies in Bangladesh send home billions of dollars every year, but there is no reliable data that can capture the true extent of the outbound remittance.

Officially, remittance outflow averaged only $57 million per year in the last five years, data from the central bank showed, far lower than the assumption of the government, experts and analysts.

The official outflow of remittance was $93 million in the last fiscal year, up from $68 million a year ago.

Economists, business leaders and even ministers said on various occasions in the past that as much as $5 billion is sent out of Bangladesh every year by foreign nationals working mostly in the export-oriented garment industry.

In May 2018, former finance minister AMA Muhith said, “This $5 billion is taken mostly by Indians, Sri Lankans and nationals from our neighbourhood.”

According to a study of the Transparency International Bangladesh (TIB) released in February this year, an estimated $3.1 billion is siphoned out every year by foreign nationals employed in the country.

About 1.6 lakh foreigners became gainfully employed in Bangladesh after entering the country on a tourist visa, it said.

Typically, foreigners enter Bangladesh on a three-month tourist visa and manage jobs soon afterwards given the shortage of people with strong communication and management skills, which are in high demand in the garment sector, the second-largest supplier of apparel in the world.

When their visa nears expiration, they go back to their home countries and return with a fresh tourist visa and continue in their previous jobs, the TIB alleged.

“The central bank data is unrealistic and unbelievable,” said Iftekharuzzaman, executive director of the TIB, on Tuesday.

In 2018, China received the highest $1.03 billion in remittance from Bangladesh, according to the WB estimate, which arrived at the figure taking into account migrant stocks, host country incomes, and origin country incomes.

Kazi M Aminul Islam, a former executive chairman of the Bangladesh Investment Development Authority (Bida), said there is a lack of skilled workforce at higher levels that compels the private sector to hire foreign citizens for better output.

He also thinks that the central bank data is inaccurate. “Former finance minister AMA Muhith himself publicly disclosed the actual remittance outflow of around $4 billion to $5 billion per year.”

According to him, the BB records the outflow based on the salaries of the officially appointed experts or consultants. But the amount is nominal in comparison to the salaries paid by the private sector to foreign citizens.

“During my tenure at the Bida, I initiated a move to find out the exact figure of outbound remittance. But it did not complete during my time,” he said.

Islam urged the government to find out the real figure of remittance outflow by carrying out a study.

“It is important to unearth the data to ensure the outflow through the official channel. The government will get tax from it.”

Ahsan H Mansur, executive director of the Policy Research Institute of Bangladesh, said the record of the BB is unrealistic as the actual remittance outflow is far higher than the official data.

There are a lot of foreigners from India, Sri Lanka, and Pakistan who work in the private sector and at multinational companies, he said.

The private sector depends on foreign employees at the managerial level as they are sincere. On the other hand, Bangladeshis are not skilled and do not work sincerely, Mansur said.

Foreigners send their incomes through the unofficial channel as the private sector does not want to face unnecessary hassles in securing permission, he said.

There are thousands of Chinese citizens employed at various projects and do business in Bangladesh. They earn legally but transfer their earnings through the unofficial channel, said Mansur, also a former senior official of the International Monetary Fund.

Paban Chowdhury, executive chairman of the Bangladesh Economic Zones Authority, said the Beza provides permit to work in the economic zones but it has no authority to keep the record how foreign citizens send their salaries and other allowances to their country.

The employers and government agencies are responsible for ensuring that the outbound remittance goes through the official channel, he said.

Md Sirazul Islam, executive chairman of the Bida, said the agency grants work permits to foreign citizens against the demand of investors.

The Bida does not have data or study on remittance outflow, he said, suggesting that banks could keep the record and provide it to the central bank.

According to him, the Bida has the scope to keep the records of the payments made for technical assistance and royalty.

Zahid Hussain, a former lead economist of the World Bank Dhaka office, said the number of foreigners working in Bangladesh without securing work permits is far higher than those who have the availed the permission.

“So, payments made to them have to be done through informally as there is no other option.”

The economist blamed the complexities in issuing work permits for the situation.

“If the process had been transparent, the foreign workers would have received payments officially and thus sent home the money through official channels.”

Hussain said if skilled workers had been available locally, employers would not have gone for foreign hiring since the latter creates a lot of liabilities for them.

He said if skilled workers are not available locally and companies do not hire them from other countries, production would be hampered. “This would ultimately hurt the economy.”

“The lack of adequate skilled workers also points to the weakness in our education system. Until the country can plug the skill shortage, employers would have to rely on foreign workers.”