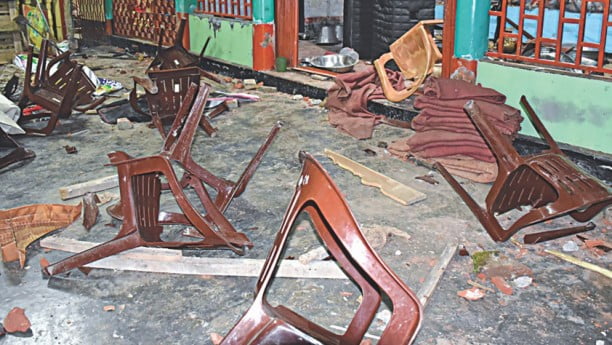 Biplob Chandra Baidya, a youth from Bhola, has been languishing in jail for a year even though a hacker, arrested by police, confessed to have circulated anti-religious messages using his Facebook ID.

The hacker broke into the Facebook account of Biplob and spread the hateful messages, sparking violence that left four people dead on October 20 last year.

He used to target Facebook users and hack their accounts, said a police officer close to the investigators.

After taking control of a Facebook account, the hacker would ask the user to send him Tk 600 to 650 through a money transfer app. He would allow the victim to have access to the Facebook ID only after receiving the money.

“In the confessional statement recorded by a court under Section 164 of Criminal Procedure Code, the arrestee [the hacker] confessed that he committed the same offence earlier but never faced any problem,” the officer told The Daily Star, wishing not to be named.

“Examining his mobile phone, experts also found that he hacked Biplob’s Facebook ID and spread the hateful messages,” he added.

The hacker was arrested from Habiganj days after the incident but in the last one year, neither the police nor the home ministry disclosed this to the media.

The official also did not reveal his name as the matter is sensitive and still under investigation.

As the messages hurting religious sentiments came to the fore, a case was filed against Biplob, in his early 20s, under the Digital Security Act on October 20 last year.

Biplob, however, had lodged a general diary with police on the afternoon of October 18, saying his Facebook account was hacked and hateful messages were spread through it.

Two other Bhola youths — Rafsan Islam Sharif and Md Emon — and seven to eight others were also made accused in the case under the Digital Security Act. They later obtained bail from a court.

The case is now being investigated by the Police Bureau of Investigation (PBI).

After the spread of the anti-religious messages, a group of religious zealots organised a rally at Borhanuddin upazila on October 20 last year.

They attacked police, prompting them to retaliate with gunshots which led to a fierce clash, leaving four people killed and over a hundred, including policemen, injured.

After the clash, a group of vandals entered a nearby Hindu locality and destroyed a temple, eight houses and a shop. They set fire to a portion of a house and a motorcycle and torched a nearby shop.

And in all those cases, the pattern is similar — the Facebook account of someone from religious minorities is hacked, a post or message hurting religious sentiments is posted, an outpouring of rage both on social media and on the streets and eventually attacks on minority communities.

None of the police investigations that followed the mentioned incidents could find enough evidence to prove that the persons from the religious minority groups had made the posts in their Facebook accounts.

Yet, the cases against them have not been dismissed.

Banaj Kumar Majumder, deputy inspector general of police and chief of PBI said, “We are still waiting for the report from Criminal Investigation Department on the mobile phone and Facebook ID of the man [Biplob] who claimed that his Facebook ID was hacked.

“Soon after getting the report, we will submit the charge sheet.”

The PBI boss also told this newspaper that they have already got evidence that the arrested hacker had hacked the Facebook ID and spread the messages.

Contacted over phone, Washim Kumar Baidya, an uncle of Biplob, said, “Police told me that my nephew is innocent and he will be relieved of charges in the charge sheet.”

Satya Prashad Das, 78, a retired school teacher who was also physically assaulted during the atrocities in Bhola, filed a case against 400 to 500 people.

He died on July 23 this year, according to his son Sanjoy.

Sarkar Mohammad Kaiser, superintendent of police in Bhola, said they arrested 13 people in the case filed by police over the clash and five others in connection with the case filed by Satya for attack on Hindu community members after scrutinising video footage.

All of them are now on bail.

He further said both the cases were still under investigation.