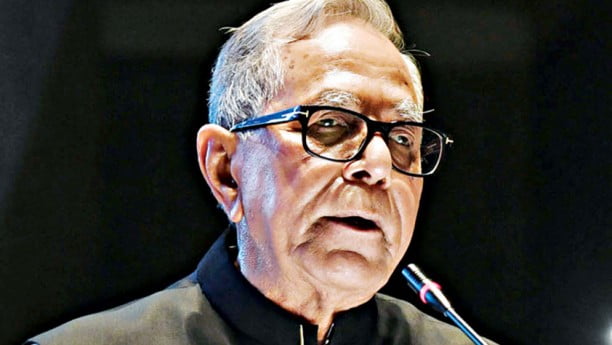 President Abdul Hamid yesterday told parliament that political parties will have to nurture the culture of tolerance, show mutual respect and give importance to others’ views to give institutional shape to democracy.

“Getting imbibed with the spirit of 1971, we shall have to build up resistance against those who seek to hinder advancement in the country through confusion-mongering and derailing the simple-minded people of this land by denying the reality and concocting imaginary stories and situations,” he said.

“Only then would the ‘Golden Bangla’ as dreamt by Bangabandhu materialise, and the celebrations of his birth centenary become meaningful,” he said.

He also said, “The unity that brought us together in 1971, that unity has to be forged against communalism, undemocratic behaviour and violence.”

The president was delivering his speech in a special parliament session that began on Sunday. The session was convened over Mujib Borsho, marking the birth centenary of Bangabandhu Sheikh Mujibur Rahman.

This was the first time the Jatiya Sangsad went into such a special session in its history, according to sources at the parliament secretariat. The special session was scheduled to be held on March 22, but was postponed following the coronavirus outbreak.

Earlier, parliament went into special sittings on two occasions on January 31 and June 18 in 1974. On both the occasions, the JS was in session and was addressed by then Yugoslav president Marshal Josip Broz Tito and Indian president VV Giri.

During yesterday’s proceedings, Hamid pointed out in brief the successes of Sheikh Hasina’s government in different areas, especially the government’s tackling of the pandemic.

“Those who tried to look at these two phenomena separately have failed. Today’s reality is the biggest proof of that,” he said.

Saying that the Father of the Nation had a huge heart, Hamid said, “His confidence, love and faith in his countrymen were infinite. He repaid the love of the people of Bangla by sacrificing his own life. He has made the Bangalee nation indebted to him.”

The president said Bangabandhu always got himself involved in helping others and ameliorating their sorrows. “Instead of bothering about his own happiness and sorrow, he used to worry about others. That was the beginning. He started protesting whenever he saw injustices, exploitations and repressions. He never became confined within his own self or the domain of his family.

“Even while standing on the gallows, he sang the victory-song of Bangla, the Bangalees and Bangladesh. He was unwavering and resolute even when he learnt that his grave was being dug beside the condemned cell.”

Hamid also said Bangabandhu had participated in anti-British rallies and gatherings at the age of only 14. Personal and family bondages could never become a hindrance to the political pursuits of Bangabandhu.

Saying that Bangabandhu used to attach highest priority to the proceedings of the constituent assembly, Hamid said there were no opposition parties in the assembly, and the number of opposition members was less than 10 when all parties and independents were combined.

“But the opposition members were quite vocal and used to get sufficient time for placing their arguments. The parliamentary sessions were quite lively. The arguments, debates and presentations of views were very attractive.

“Bangabandhu used to attach much importance to the opinions of opposition members in all the proceedings of parliament.”

He added, “There was also another notable feature of that parliament. The Speaker was embarrassed when anyone spoke against Bangabandhu in parliament, but Bangabandhu did not show such an emotion. This could not be imagined if one was not liberal and democracy-minded.

“However divergent the political ideologies might have been, Bangabandhu never cast any aspersion on the opposition leaders. Rather, he spoke by showing due honour for them. Political courtesy was a notable feature of his life.”

After a break of about 15 minutes following the president’s speech, the JS proceedings resumed when Prime Minister and Leader of the House Sheikh Hasina brought a resolution under section 147 of the rules of procedure of parliament paving the way for discussion on the political life, work and philosophy of Bangabandhu to pay tributes to him marking Mujib Borsho.

While placing the resolution, Hasina described various aspects of Bangabandhu’s life and work and his sacrifice for the Bangalee nation throughout his life.

This was for the first time any prime minister brought any resolution in parliament for discussion, sources at the parliament secretariat told The Daily Star.

Discussion on the resolution will be held for four days.