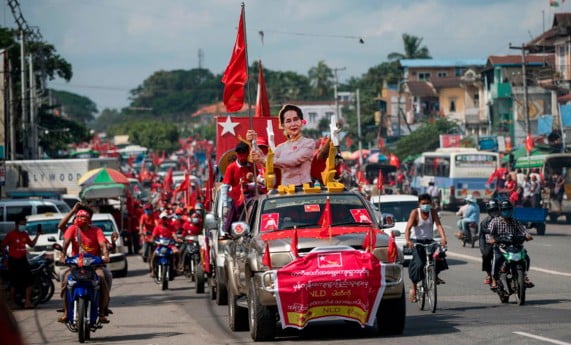 This past week, the world has been transfixed by the high-drama US elections and the soon-to-be ex-President Trump’s temper tantrums, as his opponent Joe Biden slowly overtook him to become the President elect of the United States. Overshadowed by the fiercely contested US polls, the November 8 general elections in our neighbouring country Myanmar may have slipped under the radar for many.

However there were, surprisingly, certain similarities between the two countries’ national ballots—both elections took place against the backdrop of a global pandemic with massive economic repercussions in increasingly polarised societies, and were considered to be historically significant. The US elections represented a nation-wide pushback against Trump’s brand of right-wing populism, and the Myanmar elections represented a new era of democratic reforms that were ushered in after the 2015 elections, where a landslide victory by Aung San Suu Kyi’s National League for Democracy (NLD) established her as the State Counsellor of Myanmar and ended outright military rule. Or so it was hoped.

Unfortunately, the similarities between the two nations’ ballots turned out to be skin-deep—while the US elections, despite many attempts by President Trump and his supporters to undermine the process, proved itself to be a free and fair exercise in a functional democracy, the Myanmar elections could hardly make the same claim.

At this point, one must acknowledge that a democratic process, no matter how flawed, is infinitely preferable to a country ruled by a military dictatorship, as had been the case for Myanmar since the early 60s until the historic 2015 elections. However, the fact that a quarter of the seats in parliament are still reserved for the military sticks out like a sore thumb—if Myanmar is ever to truly function as a democracy, the privileged position of the military, not only in security concerns but in national governance, must become a thing of the past.

At the time of writing this, Suu Kyi’s NLD is favoured to come out on top in the Myanmar general elections, despite the fact that the NLD needs at least 322 seats to form a government whilst the army-backed opposition Union Solidarity and Development Party (USDP) needs only 156. Early on in the day yesterday, NLD spokesperson Dr Myo Nyunt told Frontier Myanmar that the party’s internal results showed it had won enough seats to form government—saying “We have won almost every seat in the (Bamar-majority) regions.” This was corroborated as results trickled in throughout the day, showing quite a few NLD gains in former USDP-stronghold constituencies, such as in Bago and southern Mandalay. However, the fact that these “centres of Buddhist nationalism” are now voting for NLD and not USDP reflects the dark undercurrent of racial tensions that have marked Myanmar’s polls.

It is estimated that a total of 5,643 candidates stood for elections across 1,119 constituencies in national and regional legislatures, with around 20 to 30 million people casting votes across 50,000 polling stations. What’s missing from this calculation are the number of voters who were stripped of their right to vote, either due to Myanmar’s highly controversial citizenship laws that have excluded the entire Rohingya population by denying them citizenship, or as a result of polling centres being shut down in almost all of Rakhine, as well as in townships in Kachin, Karen and Shan—all states with significant ethnic minorities who are likely to vote against the ruling NLD. Overall, Human Rights Watch estimates that at least 1.5 million voters have been disenfranchised in Myanmar itself, and that is without counting the close to 1.1 million Rohingya who have fled genocide in Rakhine and are now trapped in refugee camps in Bangladesh.

The marginalisation of minority groups in the electoral process, especially while Myanmar is engaged in the worst civil conflict in decades with the Rakhine armed group Arakan Army (AA), raises many red flags. There have also been reports of members of different ethnic groups being denied the opportunity to vote for their specific ethnic affairs minister. According to Myanmar journalist Aye Min Thant, voter suppression can get codified in Myanmar law—”The way “race” is created through Myanmar’s law and is then tied to unequal rights mean that huge portions of the population end up in strange limbos”.

This division of Myanmar society along racial lines, with the NLD also exacerbating and encouraging these tensions and tapping into Buddhist nationalist sentiments to expand their voter base, despite being the party that spearheaded the democratic movement in Myanmar, is worrying indeed. As journalist and researcher Ben Dunant writes in The Diplomat—”The suffering of these minority groups is not evidence of Myanmar “backsliding” into dictatorship, but of its evolution into an illiberal, majoritarian democracy, in which the government is increasingly responsive to majority demands, but where the only protected minority interest is the military, which still controls key security ministries and retains a quarter of all parliamentary seats.”

What do these elections mean for Bangladesh? So far, our government has been inordinately patient with the Myanmar authorities, hoping against hope that a sustainable solution will be reached regarding the repatriation of Rohingya refugees in Bangladesh. However, the total erasure of the Rohingya from the electoral process and the continued demonisation of the minority group, with anti-Muslim hate speech actually being used as a tactic to gain voters, gives us every cause for concern. It seems almost like Bangladesh is being taken for a ride here—the carrot of safe and dignified repatriation of Rohingya refugees is being dangled in front of us, while within Myanmar, the anti-refugee, anti-Muslim rhetoric of electoral campaigns and the mass disenfranchisement of Rohingya voters are only further entrenching apartheid conditions and demonstrating there is still no place for the Rohingya in Myanmar.

Than Htay, leader of the USDP, recently told AFP “I cannot accept useless people in our country” about the stateless Rohingya, and USDP supporters even created a parody of an NLD anthem, claiming Suu Kyi’s party had welcomed “Bengali Muslims as if they were gods”. The fact that this political mud-slinging entailed accusations of being too accepting of other races and religions, in an attempt to gain support from the majority Bamar population, is very telling of a deep-rooted and insidious culture of assimilation within Myanmar, where different races, languages and cultures are routinely excluded from mainstream society. However, the USDP’s tactics do not seem to have worked—NLD is projected to gain an even bigger victory compared to 2015, although the USDP is refusing to concede losses in certain townships.

NLD’s return to power, despite the USDP being backed by the military, would be a win for democracy in Myanmar. However, its soaring popularity at home, despite its reputation collapsing in the international community due to Suu Kyi’s defence of the Myanmar military at the International Court of Justice (ICJ) and her denial of the Rohingya genocide, is an indication of a society that is fractured along communal and racial divides.

Will the newly elected government of Myanmar push for a more democratic and inclusive society, with civic spaces that allow dissenting voices to hold those in power to account? While we hope democratic institutions will continue to evolve and become stronger, it is difficult for us to keep the faith in Myanmar’s fledgling democracy while minorities continue to be denied their democratic rights, ethnic conflict continues to escalate within its borders and the armed forces continue to exert their political and economic influence across the country. As the cases of genocide and war crimes against its military at the ICJ and the International Criminal Court progress, the treatment of the country’s persecuted Rohingya population will ultimately be the litmus test for democracy in Myanmar.

Shuprova Tasneem is a member of the editorial team at The Daily Star.