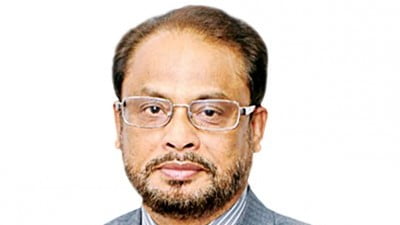 Jatiya Party (JP) founder and late president Hussain Muhammad Ershad is regarded a dictator, though he never admitted it. Even the current leadership of the party does not acknowledge it. After his death, his younger brother Golam Mohammed Quader has assumed the role of party chairman.

The party has been in the parliament since 2008 as Awami League-led grand alliance partner. Jatiya Party is acting as the opposition party in the current parliament, though it participated in the 2018 national election as an AL-led alliance partner.

GM Quader, also deputy leader of the opposition in the parliament, has recently talked to The Daily Star over different contemporary issues including the current political and democratic situation, article 70 of the constitution and his party’s political stance.

Following in an excerpt of the interview:

The Daily Star (DS): There’s confusion regarding whether JP is a part of the government or an opposition party in the parliament…

GM Quader: It is true that there’s some confusion among people. We joined the AL-led grand alliance before the election in 2018. We had to speak in favour of AL chief Sheikh Hasina at that time. But things have changed. No other political party save JP could secure significant number of seats in the parliament. For that, the necessity of an opposition party became urgent in the parliament and that’s why we have decided to act as the opposition party.

GM Quader: It varies from person to person. Some realities cannot be overlooked. We could act as a partner of the ruling party. In that case, it would be somewhat a one-party parliament where everybody would speak similarly — no one opposing the decision of the treasury bench. Then, the parliament would not function properly. That is why, we have decided to act as opposition party. An opposition party is not an enemy of the government. We all are working for the country. In many cases, our views may differ with the government. I think our decision is helping the country.

DS: But many think JP can’t or doesn’t act as opposition party…

GM Quader: What is the base of that assessment that we have failed?

DS: People do not see JP’s strong voice against many public interest-related issues like price hike of daily essentials and lack of good-governance in the country…

GM Quader: We have raised our voice over all these issues. We have talked about election, corruption, extra-judicial killings and other issues in the parliament. These are all documented and recorded. We have also addressed issue of negligence on part of the government. We have raised our voice over the negligence in duties of Health Ministry and WASA. We have talked about all issues impacting the people. We have spoken both inside and outside the parliament.

DS: How do you evaluate the country’s prevailing political, social, and law and order situations?

GM Quader:  We are looking at these issues like the people of the country are. We have raised our voice against all the nuisances. We have even placed some alternative proposals to end these. The government has taken some measures on the basis of our proposals. The opposition party can only raise its voice in and outside the parliament.

Constitutionally, the government alone has the jurisdiction to take any policy decision. The government head’s decision is the final decision. So, the opposition party cannot do much.

DS: How is the situation regarding good governance in Bangladesh?

DS: In the political circle, it’s said that corruption got an institutional shape during the regime of HM Ershad, and the situation worsened during the subsequent BNP and AL governments. What is your take on it?

GM Quader: We have been saying for a long time that the level of corruption during Ershad’s regime was far less than the present time.

DS: Was the level of corruption less at that time due to the budget being smaller compared to succeeding governments?

GM Quader: Corruption kept increasing during all the post-91 governments. It is not fair to blame Ershad for this. Governance was far better during Ershad’s tenure than it is now.

DS: What do you have to say about the trend of votes being cast the night before election?

GM Quader: I think fair electoral process is mandatory for a democratic country like us. We have restored parliamentary democracy. But it is dysfunctional. How much democracy prevails in a country can be measured by observing how fair the elections are. When elections become the single standard for measuring democracy, the situation is called “Democracy for one day”.  We could not maintain that system. This happened during all the governments’ tenures.

DS: When HM Ershad was JP chairman, we saw many incidents of double standards. He used to say one thing in the morning and backtrack in the afternoon. Is this trend still continuing in the party?

GM Quader: These were highlighted to align Ershad with some political issues. Any decision can be changed and improvised. It is a normal political practice. Not just Ershad, many politicians do it. Even the other major political parties — AL and BNP — cannot say that they did not change their decisions. In post-91 period, Ershad had to run the party, weathering a situation similar to a turbulent sea. In that situation, he had to balance things with the rough waves. If he had not done that, it could have been very difficult for him to keep the party afloat.

DS: Is the party still struggling to survive?

GM Quader: Every political party has to struggle for survival all the time.

DS: Many believe that JP is run by others instead of its leaders. What do you say to that?

GM Quader: It is not true. We run our party. You people are in confusion on whether JP is run by its party leaders or AL leaders. Similar confusion can be raised about all the political parties.

DS: But the question is whether you can take your decision, despite such influence?

GM Quader: We take our own decisions. We do things we think are good for our party. We have formed alliance for elections. Being an alliance partner, we often suggest AL on many issues. AL also accepts our suggestions. But nobody can give any example that we have taken any decision that went against our party’s interest.

DS: Once JP had significant organisational strength at national level. Later, it was noticed that the party had a strong hold in the country’s northern region. Is JP turning into a regional political party from a national one?

GM Quader: Jatiya Party has its own image and strength. It was never a regional party. The people of northern region consider JP as their own party. They think they are deprived of their rights and other benefits as there’s no leadership like HM Ershad now. That is why, they loved Ershad. But JP works for the betterment of the entire country. We have organisational strength and lawmakers everywhere in our country.

DS: Do you think JP has weakened after its alliance with AL?

GM Quader: We have not weakened.

DS: What type of electoral system do you expect in future?

GM Quader: I’d like an electoral system where people really get the chance to exercise their voting rights and can freely choose their leadership.

DS: Deterioration of law and order situation, rape, attack on protesters, price hike of daily essentials are happing in the country. In many cases, these have gone beyond control. Why did such situation arise?

GM Quader: The main reason behind these nuisances is lack of good governance and accountability. The situation kept worsening after restoration of parliamentary democracy in ’91.

DS: Do you think one party presidential rule is better than parliamentary democracy?

According to Article 70, a person elected as a member of parliament (MP) in a national election in which he or she was nominated as a candidate by a political party shall vacate his/her seat if s/he a) resigns from that party or b) votes in parliament against that party.

This provision means that the Prime Minister’s decision will be the ultimate decision. When the process of accountability goes missing, parliamentary democracy starts malfunctioning. So, our demand is to revoke that article to allow all the parliament members to speak freely.

DS: If article 70 is abolished, will it not create an opportunity for underhand dealings like buying out a lawmaker’s vote?

GM Quader: That is why we proposed to amend the provision.