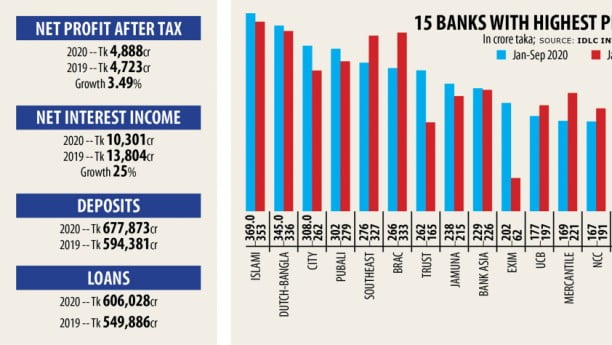 Most of the listed banks logged higher profits in the first nine months of 2020 despite a lower net interest income amid the business slowdown caused by the coronavirus pandemic.

Lower provisioning was the main driver behind the higher profits.

All the 30 banks listed with the Dhaka Stock Exchange declared their third quarterly earnings. The financial report of 27 lenders is available on their website.

Eighteen out of the 27 posted a year-on-year rise in profits during the January to September period. They logged 3.49 per cent higher profits of Tk 4,888 crore in the nine months.

Their combined net interest income, the biggest source of revenue, dropped 25 per cent to Tk 10,301 crore thanks to two steps introduced by the central bank — 9 per cent interest cap in April and a payment holiday after the Covid-19 outbreak.

Provisioning of the listed banks also dipped 47 per cent year-on-year to Tk 2,009 crore.

“The stock market was also vibrant this year, so many banks did not need to keep provision. This ultimately boosted the profits of the banking sector,” he added.

On March 19, after the country was struck with the pandemic, the banking regulator asked lenders not to consider businesspeople as defaulters if they fail to repay instalments until June 30.

As the crisis prolonged, the deadline was extended initially to September 30 and then to December this year.

As the central bank has granted the payment holiday, banks are not compelled to set aside funds to cover future losses although new lending has not come to a halt and there is also non-payment of instalments.

“Banks should be more careful in booking profit this year and paying dividends because if they disburse dividend on unearned profits, they will be in trouble next year,” said Syed Mahbubur Rahman, managing director of Mutual Trust Bank.

As the banks’ profit rose riding on the lower provisioning and despite experiencing a reduction in the net interest income, they can announce dividend but it should not be much higher, he said.

“We don’t know what the real scenario will be next year. Many companies are exporting products now but they might not receive the payment on time due to the Covid-19. Some good companies may even shut operations.”

“A number of loans might be classified or turn bad next year. So, we should be prepared for that. If banks keep adequate provision. it will boost their books as well.”

A managing director of another bank said the profit situation of the banking sector is not the real picture and it would not sustain.

“The main shock would be clear next year when they will need to classify doubtful loans and subsequently keep higher provisioning,” the top official said.

The loans that were recouped in the last few months were small loans whereas big loans have largely remained unrealized, he said. “The problem would exacerbate in the upcoming year.”

The managing director urged the central bank not to allow banks to give higher cash dividends based on the “artificial profits”.

“If banks don’t keep the provision, they will face an enormous challenge next year because they will witness a rise in non-performing loans when the loan moratorium is lifted,” Hossain said.

“How would they then manage the situation?”

Deposit collection by the listed banks fell about 17 per cent to Tk 677,873 crore at the end of September compared to December. Lending dipped 20 per cent to Tk 606,028 crore.

Trust Bank has the highest annualised return on equity of 21.1 per cent, followed by Jamuna Bank’s 16.9 per cent and Dutch-Bangla Bank’s 16 per cent, data showed.

City Bank had the highest year-to-date loan growth of 20.1 per cent, followed by Exim Bank’s 12.4 per cent and First Security Islami Bank’s 10.8 per cent.

State-run Rupali Bank registered the highest deposit growth of 17.5 per cent, followed by Dutch-Bangla Bank’s 15.7 per cent and Islami Bank’s 15.6 per cent.