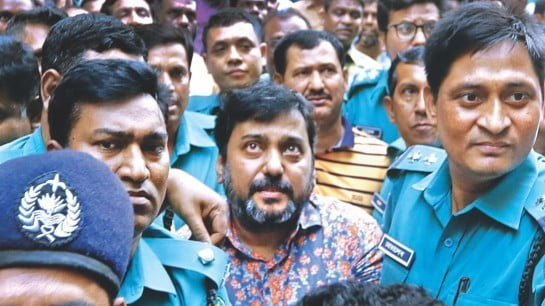 Expelled Jubo League leader Ismail Chowdhury Samrat, one of the “casino kingpins” in Dhaka and his close aide Enamul Haque Arman have been shown arrested in a Tk 195 crore money laundering case.

Metropolitan Magistrate Md Sarafuzzaman Ansary today passed the order after Md Mehedi Maksud, an inspector of Criminal Investigation Department (CID) and also the investigation officer of the case, produced them before the court with a petition to show them arrested in the case.

Read more: He siphoned off Tk 195cr to Singapore, Malaysia

The magistrate rejected a bail petition of Samrat after his lawyer moved it on grounds that he has been suffering from different ailments including heart disease.

The prosecution opposed it, saying that the accused had committed offences by laundering money abroad.

On September 13 this year, CID filed the case against the duo under the Money Laundering Act with Ramna Police Station.

In the case, it was alleged that Samrat siphoned off Tk 195 crore to Singapore and Malaysia illegally, with the help of his aide Enamul.

On October 6, 2019, Rapid Action Battalion arrested Samrat, who was the president of Dhaka South unit of Jubo League, and Arman, former vice-president of the same unit, from Cumilla after raiding a house near the Indian border.

He came under the spotlight after Rab busted his illegal casino business at different sporting clubs in Dhaka and later was expelled from the Jubo League following his arrest.