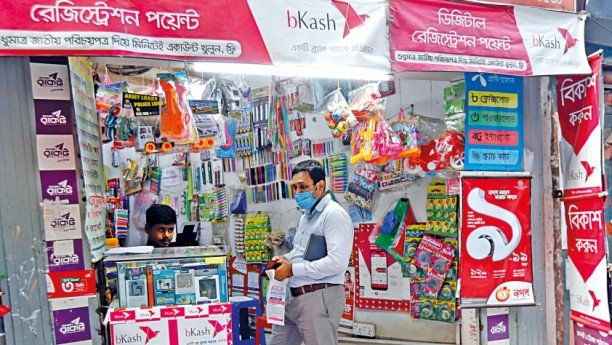 Transactions through mobile financial services (MFS) rebounded strongly in September as people are preferring digital banking over the traditional one to adapt to running their life smoothly amid the coronavirus pandemic.

The MFS transactions, however, narrowed in August due to the hangover post binge-spending in Eid, but September’s trend gave an indication that this cashless mode will gain more popularity in the months ahead.

This is the second highest amount since July when the country’s 15 MFS providers posted a record amount of Tk 62,999 crore. Bangladesh introduced MFS nearly a decade ago.

When the government declared the lockdown from the last week of March to May to keep the deadly coronavirus at bay, people initially faced difficulty in adopting the digital tools for availing banking services.

But use of the digital banking tools is gradually becoming a habit for clients, pushing up transactions through MFS.

The MFS are one of the largest digital banking methods in different countries which discourage branch-led banking.

During the ongoing pandemic, people to a large extent opted for the MFS, signified by the third highest transaction amount worth Tk 47,601 crore being recorded in May.

The number of loss-making branches rose 36 per cent year-on-year to 1,907 in June, data from the central bank showed.

The number may increase more in the days ahead as digital banking including MFS gains more popularity.

Banks in countries of Europe and North America have already started to close their branches.

The latest upward trend of the MFS transaction is a reflection of peoples’ attitude to embracing branchless banking, said Kamal Quadir, chief executive officer of bKash, the country’s largest MFS provider in terms of transaction and number of accounts.

Transactions through the MFS will go up more and more beyond doubt in the years to come, he said.

The magnificent transaction record has also given an indication that the economy is gradually recovering from the slowdown in business caused by the coronavirus pandemic, he said.

The number of active accounts rose 19.32 per cent year-on-year to 4.10 crore in September as people are now preferring the digital financial tools more than ever to carry out banking from home.

The daily average transaction amount stood at Tk 1,637.37 crore in September, up 38.2 per cent year-on-year. Meanwhile the number of total transactions went up 28.55 per cent to 27.30 crore.

People in urban areas now largely avoid going to branches to settle retail transactions, such as payment of utility and credit card bills, tuition fees and so on, said Abul Kashem Md Shirin, managing director of Dutch-Bangla Bank, which owns Rocket, one of the country’s largest MFS providers.

People from low-income groups earlier took the financial service from the MFS providers, but the middle-and-higher-income segments have also come to choose the service, he said.

People now use their MFS accounts to purchase goods and services from the domestic market instead of using credit cards, he said.

The expatriate Bangladeshis now send remittance in real time by way of using the window.

Salary disbursement from businesses to persons advanced 148.19 per cent year-on-year to Tk 1,954.85 crore in September.

“We have been observing in recent months that people are showing an immense interest in settling their transaction by way of using the cashless modes,” said Tanvir A Mishuk, managing director of Nagad, the second-largest MFS carrier in the country.

“The reflection is being noticed on our network as well,” he said.

The upward trend of the transactions through MFS means clients are carrying out banking without going to branches, he said.

“In my view, we are on the right track of financial digitalisation, where the MFS sector will lead from the front,” Mishuk said.

The MFS transaction amount has reached nearly Tk 50,000 crore per month and the figure will be doubled within the next few quarters, he said.

People do love using the service and enjoy the benefit of real-time transactions, which is completely contactless, he said.

The number of MFS agents stood at 10.17 lakh in September in contrast to 9.51 lakh one year ago.