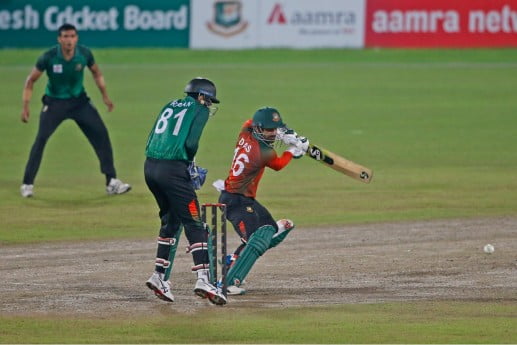 Mahmudullah XI had lost both their group stage matches against Najmul XI but came back strongly in the final to lift the BCB President’s Cup.

Opener Liton Das led from the front in chase of a target of 174 with some classy shots, keeping the Najmul XI bowlers on their toes. Liton’s brisk start saw Mahmudullah XI get rid of early nerves and even though Mahmudul Hasan (18 off 32) and Mominul Haque (4 off 12) did not stay at the crease for long, the stage was set for Mahmudullah XI to chase down the target easily as Liton struck 10 fours on his way to 68 off 69 before falling to Nasum Ahmed trying to finish the game quickly.

Imrul Kayes went big at the other end too and his 55-ball 53, laced with six sixes and a four along with skipper Mahmudullah Riyad’s attacking 11-ball 23 saw Mahmudullah XI coast to victory in 29.4 overs with seven wickets to spare.

Sumon took five wickets for 38 runs to break the backbone of Najmul XI, who had come into the final on top of the table after group stage. National team pacer Rubel Hossain took two wickets while Mehedi Hasan, Mahmudullah Riyad and Ebadot Hossain took one wicket each.

The tournament’s top two scorers Mushfiqur Rahim and Afif Hossain failed to get going. Mushfiqur scored 12 while Afif was removed for naught, both by Sumon.