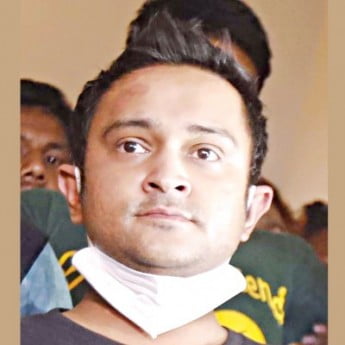 With suspended ward councillor Erfan Salim behind bars, locals in Debidas Ghat Lane of the capital’s Chawkbazar are still afraid to talk out about his illegal activities.

A trader from Devidas Ghat Lane area said, “The Rab recovered 38 walkie-talkies. But we saw Haji Salim’s men using those for years. They were involved in land grabbing, extortion and other criminal activities. Where are they now?”

“The law enforcement agencies took the action after the assault on a navy officer. But when we, the general people, went to local police stations to file complaints against Haji Salim’s men, they didn’t record those,” complained the trader who asked not to be named.

Locals said Haji Salim’s men went into hiding following the arrest of Erfan. In the meantime, some of the victims regained possession of their properties which were grabbed by the lawmaker’s men.

They expressed fear that the MP’s men would reappear in the area once “their trouble” is over.

Meanwhile, a Dhaka court yesterday placed Erfan and his bodyguard Zahidul Mollah on three-day remand each in a case filed over the attempted murder of a navy officer.

Additional Chief Metropolitan Magistrate Muhammad Asaduzzaman Nur passed the order after Ashfaq Rajib Hasan, inspector (investigation) of Dhanmondi Police Station and also the investigation officer of the case, had produced them before the court with seven-day remand prayer for each.

All four are now behind bars.

Yesterday, the Anti-Corruption Commission said it would look into allegations made in recent media reports about Haji Salim and his family members.

Responding to queries from reporters, ACC Commissioner Mozammel Haque Khan said, “We have seen media reports on Haji Salim and his son Erfan Salim. We are noticing that the issue is related to law and order.”

If any issue falls under the jurisdiction of the ACC, “we will look into it. If government land or properties are occupied, appropriate actions will be taken given that it is covered under the ACC act”, he added.

Despite repeated attempts, The Daily Star could not reach Erfan’s family members for comments.

Sohel Hawlader, assistant personal secretary to Haji Salim, said the lawmaker was ill and he would not comment on the matter.