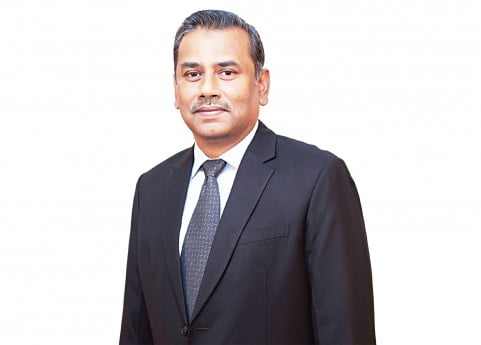 With a long and successful career at the top of several multinational companies (MNCs), Reazul Haque Chowdhury took the helm of Runner Automobiles in November 2018.

As managing director and chief executive officer (CEO), Chowdhury is now determined to sail the company to new horizons.

While most other corporate personalities would prefer to stick with MNCs in order to sustain their careers, Chowdhury rolled the dice when he took up his position with Bangladesh’s leading motorcycle manufacturer.

He thinks many local companies have already pulled up their socks and prepared themselves for the long run.

However, these companies still have a long way to go, Chowdhury said.

When one compares the sizes of local and multinational corporations, it seems that domestic firms contribute heavily and play a very vital role in economic development.

“And so, MNC professionals like myself have a role to play in developing local companies for the betterment of the nation,” he added.

Even though local corporations now operate under a professional structure, there are still cultural differences between MNCs and their domestic counterparts.

There are advantages of working with local companies though, such as faster decision making and ability to take risks as needed to further the business.

“But in MNCs, there are lengthy protocols to follow,” Chowdhury said.

Runner Automobiles, the country’s first manufacturer and exporter of motorcycles, began its journey in July, 2000.

The company made its trading debut on May 21 last year with an aim to survive the long run while maintaining compliance.

“Soon, many local companies will flourish as Bangladeshi MNCs,” he added.

Chowdhury also shared his journey on becoming a CEO.

“We were the post-Liberation War generation and had no particular ambition. But I was fortunate to start my career with British American Tobacco (BAT), which I consider a resource factory,” he said.

During his 10-year stay with the BAT, Chowdhury quickly ascended the ladder before joining Unilever as its customer management director.

The lateral move to Unilever was a unique opportunity for Chowdhury as it led to the realisation of his dream to be a CEO.

“The most important part of my career was my time with the good people at the BAT and Unilever. I am here today due to their contributions to my career,” Chowdhury added.

The journey towards becoming a CEO is never defined. Instead, people must have a solid plan in mind and take things one step at a time, according to the managing director.

“Never compromise on learning when building your foundation, which is the first four or five years of your career. If you do, survival will be tough,” he said.

When making a switch from any company, Chowdhury follows a simple principle.

“I ensure that I leave my post in the most successful position. I never switched because I failed.”

After the BAT and Unilever, he joined Reckitt Benckiser as managing director for their Sri Lankan operations in 2008.

Even though a civil war was raging in the country at the time, Chowdhury took the risk by leaving his comfort zone.

He believed that this was an integral part of his future and that such courage is a key trait for leaders.

Chowdhury acted as managing director of Reckitt Benckiser from 2008 to 2016 for its Sri Lanka, Bangladesh and Thailand cluster. Prior to joining Runner Automobiles, he was the general manager for South Asia at Avery Dennison RBIS.

Being in general management usually entails the same duties regardless of the company.

“But the challenging part is to learn the trade secret of each industry you enter,” he said, adding that he knew nothing about automobiles before taking up his current position.

“Yet I took the challenge. Those who learn fast will never be in trouble.”

There is no defined work for a CEO other than playing a good leadership role.

A CEO leads his or her company through various challenges, ensures business continuity through regular tasks while remaining focused on the wellbeing of his own people.

Robert M. Rosenberg, former chairman and CEO of Dunkin’ Donuts, once said being a CEO was like being a sailboat captain who enjoys times of calm before being called in to tackle moments of sheer terror.

And as managing director and CEO, Chowdhury is now tasked with leading the company through all the economic uncertainty caused by the ongoing coronavirus pandemic.

The current crisis is an unprecedented situation that the country was not prepared for but Runner Automobiles decided that the employees’ wellbeing comes before the business, according to Chowdhury.

With the country having entered a nationwide general holiday on March 26 to curb the spread of Covid-19, there was no demand in the market until the shutdown measures were removed two months later.

And so, the company began to plan for the future to ensure its survival.

“We assured our employees that there would be no job cuts. I believe that whatever the company is doing for them, they’ll try to give it back to the company,” Chowdhury said.

The pandemic has been a great opportunity as well though as local businesses have realised that they can operate from home.

Even cars and motorbikes can be sold without showrooms, thanks to the advent of online retail platforms.

“These lessons will help reshape the future of the company,” he added.

Experience has no value without knowledge but the same is true in reverse when it comes to negotiation skills.

Any approach to negotiate with different stakeholders should vary depending on what the moment calls for.

“And this understanding comes through experience,” he said, adding that both parties must “win through discussion”.

These days, many consider building a group of followers but Chowdhury believes that the CEO’s most important role is to build a resourceful team without favouring anyone in particular.

“Without a strong team, even the world’s best CEOs can’t deliver. The vision and strategy of a CEO are to be executed by the team, and that’s enough followership for me”, he said.

An organisation is like the human body, each part is equally important.

Modern day organisations are interdependent-interconnected and all functions must be performed as efficiently as possible to make the company successful.

As for CEOs, empathy and passion are the most important attributes one could have alongside a love for the job, Chowdhury added.